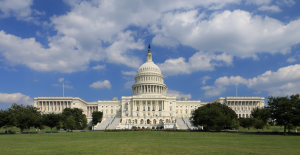 The U.S. Capitol building is one of the many iconic landmarks that you can find in our nation’s capital of Washington D.C. This magnificent neoclassical landmark houses the legislative branch of the United States Government (the House of Representatives and the Senate). While most of the legislation passes through here en route to the White House for the President’s signature as a part of the Constitutional process, even here though there may be some otherworldly spirits adding their own touches to the process. The U.S. Capitol is a place where much of America’s history was written. But the reports of ghostly activity and unexplainable happenings date back into the early years of America’s history. Not only will we expose some of the significant events of importance that happened in the Capitol building, but we will also discuss some of the tales of tragedy and sorrow that have led to some of the stories of paranormal activity and chilling acts during some of America’s darkest times.

About the U.S. Capitol

Appropriately the building sits in the Washington D.C. neighborhood called Capitol Hill. A slight mound really, only 88 feet above sea level. Specifically, the building sits on the eastern quadrant of the District of Columbia facing the eastern side of the National Mall. The building itself was completed in 1800, setting the stage as the new home of the legislative branch of the United States Government to perform business. Prior to the U.S. Capitol construction, the United States Congress met in two cities: Philadelphia and New York City. When in Philadelphia, the Congress would meet in Independence Hall and Congress Hall. Upon the establishment of New York City as its capital, Federal Hall, on Nassau Street, on the southern tip of Manhattan served as the meeting place.

The distinctive dome is made of cast-iron and supports an allegorical statue entitled ‘Freedom’ that unusually turns her back on the National mall, instead she faces the majority of visitors that arrive from the East. Many additions have been made to the building, most recently a state of the art visitors center mostly under the Capitol building. It contains a permanent exhibition, gift shops, access to viewing galleries of both houses. As well as a large café and of course a security screening area.

The United States Congress wasn’t officially established and named until the publishing of the U.S. Constitution. The first Congress convened in New York City on March 4th, 1789. On that same day, George Washington was inaugurated as the first President of the United States. When Pierre L’Enfant was commissioned to design the capital city, he chose a site called Jenkins Hill as the place where the Capitol building would be built. At the outset, L’Enfant intended to name the building Congress House. However, then-Secretary of State Thomas Jefferson believed it was much fitting to name it the “Capitol”. The word is based on a Latin temple known as the Temple of Jupiter on Capitoline Hill. The temple was located in what is known as one of the “Seven Hills of Rome”.

While the city hosting the nation’s capital was being laid out, it needed land to be reclaimed from the swampy marshland surrounding the new site. Thomas Jefferson also held a nationwide contest for architects to submit their designs for both the Capitol building and the “President’s House” (which was later named “The White House). Despite more than ten designs being submitted, a late entry submitted by William Thornton was selected by Jefferson and then-President George Washington. Thornton’s design was based on the eastern side of the Louvre, the famous art gallery in Paris. Eventually, this landed Thornton a place in history as he was named the first-ever “Architect of the Capitol”. In 1793, the cornerstone of the Capitol building was laid by George Washington and construction would soon begin. Sadly, Washington would not live to see the completion of the building as he died in 1799, the year before the building was finished.

Over the years, the Capitol not only housed the chambers of Congress, but it also served as the site of the U.S. Supreme Court. From 1865 to 1935, the court convened in the Old Senate Chamber until their own building was constructed just down the road from the Capitol building. In 1850, another expansion began which included one of the most iconic parts of the building that still stands today, the Capitol Dome. The dome was completed with the addition of the Statue of Freedom in 1863. Over the years, the building underwent many renovations and expansions.

Today, the U.S. Capitol building is frequently visited by many tourists from all over the world. Tours occur almost daily and those that take part will learn about the history of the building and get a basic understanding of how the legislative branch of the United States Government operates.

Death At The U.S. Capitol and Paranormal Activity

Throughout history, there have been eleven people who have died on the grounds of the U.S. Capitol. While their deaths may have been tragic, they set the stage for a host of stories and accounts of paranormal activity. One of the first people to die in the building was John Quincy Adams. He was the son of John Adams, the country’s second president. The younger Adams would become president in his own right. Upon his departure from the White House, the younger Adams remained in politics as a member of Congress. Always a passionate orator he suffered a stroke while on the floor of the United States House of Representatives. He was moved by his colleagues to the Speaker’s Room where he later died on February 23, 1848.

There had been stories of the spirit of an unknown Civil War soldier roaming the halls of the capitol. During the war, the Capitol building served as a makeshift infirmary for the Union’s wounded, over 1000 cots were placed in Statuary Hall, where 100 statues, two supplied by each of the nation’s 50 states, line the edges of a great round room. It was said that several soldiers died in agony from their injuries. However, the spirit of one particular soldier was said to have never left and may be lurking in the Capitol’s “Hall of Statues” to this day. Several staffers have said they sometimes see the shadow of a soldier lurking among the statues.

Many members of Congress would die in the hallowed halls of the Capitol over the years. A Journalist at The Louisville Times exposed a member of Congress in a torrid affair with his mistress. The reporter and the congressman, William Preston Taulbee, (who later became a lobbyist) often met in the Capitol, and the journalist, a smaller man, was relentlessly teased by the former Congressman. The Journalist reached the end of his tether one day and put the feud to a permanent end. He confronted Taulbee on the capitol stairs and shot a pistol into his soft fleshy abdomen. It has been said that a stain on the stairs is the blood of former Kentucky Congressman William Preston Taulbee and that he may have remained on the staircase where he was shot long after his death.

The old Supreme Court part of the building was being constructed, when John Lenthall, the disgruntled junior clerk to architect Benjamin Latrobe mistakenly removed a wooden support, thinking it unnecessary. Regrettably, it was in fact supporting a large stone arch that after a moment’s hesitation came crashing down on Lenthall, he lay dying on the floor, and with his last breath cursed the Capitol building and all who worked in it.

It would then come as no surprise that there may be many a specter lurking the halls of the Capitol. These are the things that make stories about the eerie, uneasy feelings some people cannot explain away as they walk through the halls of the Capitol at odd hours and in secluded areas. However, eerie could not begin to describe one apparition that walks the grounds and halls, it’s infrequent appearances an omen for events in American history that could only be described as some of our “darkest hours”.

The Mystery Of The “Demon Cat”

It was said that back in the 19th Century, a black cat would prowl the buildings of the U.S. Capitol. He would only be seen occasionally, and shortly after one of these sightings something bad would happen only days later. This holds up quite well due to the amounts of physical evidence discovered (i.e.–paw prints), black hair not belonging to any of the congressmen or senators. The first such occurrence was said to have happened in 1865 when a black cat was seen walking through the building. Two weeks later, then-President Abraham Lincoln was assassinated by John Wilkes Booth at Ford’s Theatre.

The “Demon Cat” was spotted once again prior to another national disaster. The black auger of destruction purred it’s way around the capitol once again in 1929 just prior to the Black Tuesday stock market crash that led to the Great Depression. The last known sighting of the Demon Cat was in 1963, two weeks before the assassination of John F. Kennedy. Thank goodness there had been no reporting sightings of “D.C.” himself since.

A grand building at the ghostly heart of the capital

The United States Capitol Building holds the course of American history as it wends its course through our times. Stories that we don’t even know may be hiding in its marble corridors and are whispered around the impressive structure. If you press your ears close to the walls you can probably listen to the stories of the ghosts that roam the halls.

Even if you don’t have the imagination to believe in ghosts, the Capitol Building in Washington D.C. is a magnificent place to visit and see democracy in action if you ever find yourself in the nation’s capital one of these days.