The Yellow House – The True Story of 12 Years A Slave 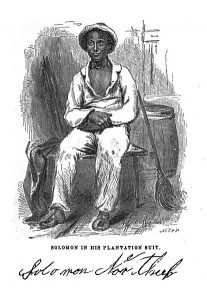 D.C., The Capitol, The joint has more ghosts, goblins, soul-wrenching backstabbing stories, than the whole series run of Tales From The Crypt. It’s the sort of place where not even that muppet, the Cryptkeeper, would dare venture without a hazmat suit, one of those fancy proton packs from Ghostbusters, and his Last Will and Testament properly archived with the county. The Capitol is a never-ending circus act where the jugglers play with chainsaws and nuclear bombs. And it’s always been that way. ALWAYS. Today, we’re going to dive into the history of one of those hot-spots of Foggy Bottom lore, trace its ancestry, and waddled through the swamp infested cesspool of deaths it somehow managed to amass. Today’s history lesson, with its double scoop helping of ghosts, is about Yellow House and part of the story of Solomon Northup. Yes, that Solomon Northup, the one from 12 Years A Slave.

If you’re reading this piece and haven’t seen that Oscar Winning Biobic, then get up, pick your favorite streaming service and do your higher functions a favor… We’ll wait.

Finished? Eyes dried up? Ready to get to work? Good, let’s talk about the underbelly of Washington.

D.C. was not only the capital of the United States but of slavery. The Eastern seaboard of the US was brimming with dozens of slave ports, but it was Washington where the heavy-duty lifting was done. In the parlance of today, Washington was the equivalent of Fifth Avenue when it came to slavery. It had quantity and it had quality, and everyone, politicians especially, were making bank on it. It was a major depot in the domestic slave trade of that epoch.

In the District, bound men, women, and children from shelters and families in the Chesapeake were detained and then violently expelled to the cotton and sugar plantation in the Deep South. Escaped slaves, inbound slaves from Africa, slaves born into slavery, the traders didn’t care. Just like in the movie, papers were forged, stories fabricated, eye-witnesses coerced, and, even worse, the law bought off. Everyone was in on it, greedy fingers smudging backwoods legislation at every corner.

Slave dealers purchased enslaved folks primarily from owners who had a surplus. The States, unlike other slave heavy regions, relied on the concept of Chattel slavery. Chattel slavery is an institution that denies the idea of human agency to people; it dehumanizes a person and labels them as property. It was a rather crafty way for a fledgling nation swamped in financial woes to get around a “self-evident truth” and find a loophole in that whole palaver of “all men are created equal.” The most insidious element of this form of slavery is the fact that since vassals are considered material things, then their offsprings are just an offshoot of that vision. In other words, descendants of slaves, kids of slaves, were born into slavery. Washington and the colonies, later the States, legally upheld this form of slavery. Why? Because it created a self-sustaining market that was not reliant on foreign or international supply. If you cared for a slave, and breed the slave, you could forgo buying new laborers… while also selling your overhead. It was a win-win situation and one that America, up to its earlobes in debt, could use to fill its coffers. Slaves and the trading of them were a taxed economical activity and a lucrative one at that.

In the District of Columbia, you could find warehouses full of slaves. Places that served as halfway houses until traders could assemble a full shipment for relocation to the south. West of the U.S. Capitol, and just south of the National Mall, sat William H. Williams’ infamous slave jail, known as the Yellow House.

By the mid-1830s, the Yellow House was one more piece of the clockwork machinery that dominated slave society. Everything you’ve seen in the movies was on display at Yellow House. Whip-wielding traders, blood-hungry overseers, slave patrollers, slave catchers, foaming at the mouth vicious dogs, local militias, and a hung body or two just in case the product got “uppity”.

Folks outside of Yellow House, one of the biggest depots, would routinely inspect slaves and ask for their passes. Everyone was vigilant and slaves had little to no chance of making a break. Mind you, this was a privately owned institution in the middle of the nation’s capital… a nation based on the idea of being free, pursuing happiness, and all that nonsense

But what exactly was Yellow House?

Yellow House was a private home owned by William H. Williams and operated by his gang. When I say “gang,” I mean exactly what it sounds like; most were cutthroats and knaves. The business was a two-story home that held slaves in the basement; traders transported them to the outside court on auction day for the comfort of buyers. For Williams, every man, woman, and child he purchased and auctioned were assets in which he gambled. His entire industry was based on calculating the risk that he could buy low in Washington and sell high in the Old South.

If you came to Washington during the beginning of the 19th century there were a couple of reasons why you would court a man like Williams and employ him.

To say the building, encircled by a 12-foot wall brick was a hellish pit would be underselling the infernal quality of it.

The Yellow House was positioned just south of the National Mall, on the block defined by Seventh and Eighth streets, and by B Street and Maryland Avenue. The three-story brick building, coated and painted in yellow, lay where today tourists will find the Federal Aviation Administration’s Orville Wright Federal Building.

The most famous slave housed at Yellow House was the kidnapped Solomon Northup. Northup recounted his experiences there in his book Twelve Years a Slave. He sharply painted a literary picture of his days there; an autobiography of the horrors he experienced. Amongst them, the most graphic was how he was administered a severe beating with a paddle and a rope after being kidnapped.

The Ghosts of Yellow House

The yellow house is gone, puff, no more…The only sign it ever existed is a landmark placard and information module that people pass by every single day… a notice right on top of the place where the slave pens once stood.  But that doesn’t mean it doesn’t have a few spooks circling the area.

Before it was torn down, Yellow House already had a couple of hair-raising tales logged into its histories. Slaves that stayed there would report to their masters about “the noises creeping in from below the floorboards.” The scratches, followed by festering smells that would smack them awake in the middle of the night.

Guards would often report that their trained dogs would suddenly brake, stare affixed into a shadow, and run in the opposite direction, their tails tucked.

Neighbors, even after the house was torn down, and slavery abolished, often cited waking up in the middle of the night, to moans, and “god awful screams” slicing their dreams in half.

Yellow House had a sketchy history and one whose proprietors – men that would later get into legal trouble for trying to “dispose of” their slave cargo near New Orleans – constantly tried to hide. Rumors of deaths and rapes. Sadistic guards and even slaves brought to madness taking out their frustration on the bound population.

Where the marker now stands, ghostly activity teems. The spot a blighted area that speaks volumes of our nations demons, our hidden skeletons, and the many many many crimes we are still being haunted by. Yellow House might be beseeched by ghosts, but it is the specters of the actions that occur there that still hold an icy grip on the Nation’s heart… Got poetic there for a sec’, give me that maudlin moment please.

For more spooky tales, check out our blog.