The White House: The Most Important (Haunted) House in America

HOME » BLOG » HAUNTED PLACES » THE WHITE HOUSE: THE MOST IMPORTANT (HAUNTED) HOUSE IN AMERICA
Posted by devadmin in DC Ghosts 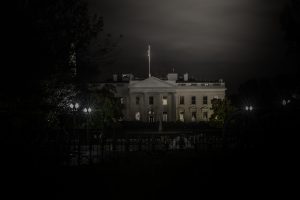 The White House is the most recognizable location in the United States for a number of reasons: political, historical, cultural. Every day, current events from the White House are relayed worldwide. Despite all the news that comes from 1600 Pennsylvania Avenue daily, one key aspect consistently goes overlooked: the White House is haunted.

The White House of the past

Yes, our nation’s most important house has (or has had) several famous ghostly residents that have never fully moved out, even when their official tenures (and lives) have ended.

The list below is just a taste of some of the many ghost stories associated with the White House. Want to learn even more? Hear all about the White House’s haunted history while seeing the landmark in-person on our DC Ghosts tour experience.

The paranormal history of the White House nearly dates back to its inception. As you may know, the nation’s capital wasn’t always Washington, D.C.

The second president of the United States, John Adams and his wife, Abigail Adams, moved to the new capital and White House from the former capital, Philadelphia. During this early period, D.C. hadn’t been developed into what it is now. The nascent capital was a small town built by the banks of the Potomac River. Because of its proximity to water and the damp land D.C. was built on, the capital was humid.

The First Lady must’ve practiced this behavior frequently, as, even after her death, she is said to still try and dry clothes in the room. Sporting a cap and lace cloak, the ghost of Abigail Adams has been seen at times drifting toward the East Room, the largest room in the White House. In these sightings, her ghost’s arms are held out, as if bringing invisible laundry to the room to dry.

To this day, White House staff sometimes inexplicably smell lavender and wet laundry by or in the East Room.

In 1824, John Quincy Adams defeated Andrew Jackson after an intense presidential election process. Even though Jackson made it to the Oval Office in 1828, he never forgot about those who supported Adams over him.

According to First Lady Mary Todd Lincoln, Jackson’s ghost carried this unhappy resentment from his life into his death.

Like many of her contemporaries during the Civil War, First Lady Mary Todd Lincoln was a firm believer in ghosts and spiritualism. From 1862-1863, she practiced seances in the White House to try to speak with her deceased son, Willie, to help cope with her grief. Willie passed on in the White House in 1862, at age 11, most likely from typhoid fever. President Lincoln himself also reported being visited continually by the ghost of his late son.

Given her sensitivity to the paranormal, Mary Todd Lincoln was able to hear Jackson stomping and swearing throughout the property, especially from the Rose Room, Jackson’s former bedroom. Clearly, Jackson’s ghost was still expressing anger from having lost that key election in his life.

The Rose Room, also known as the Queens Bedroom, is considered to be one of the most haunted rooms in the White House. Per the White House Historical Association, since the 1860s, Jackson’s ghost has reportedly been seen and heard lounging in bed in his old bedroom, laughing loudly.

Even President Harry S. Truman wrote about Jackson’s ghost. In June 1945, shortly after the beginning of his first term, Truman wrote to his wife, Bess:

“I sit here in this old house and work on foreign affairs, read reports, and work on speeches–all the while listening to the ghosts walk up and down the hallway and even right in here in the study. The floors pop and the drapes move back and forth–I can just imagine old Andy [Jackson] and Teddy [Roosevelt] having an argument over Franklin [Roosevelt].”

The following year, in 1946, Truman woke up in the middle of the night to the sound of someone knocking at his door. About this incident, Truman wrote to his wife:

“I jumped up and put on my bathrobe, opened the door, and no one was there. I Went out and looked up and down the hall, looked in your room and Margie’s. Still no one. Went back to bed after locking the doors and there were footsteps in your room whose door I’d left open. Jumped and looked and no one there! The damned place is haunted sure as shootin’. Secret Service said not even a watchman was up here at that hour. You and Margie had better come back and protect me before some of these ghosts carry me off.”

For figures as respected and rational as First Ladies and Presidents to have reported seeing Andrew Jackson’s ghost, there must be something to these otherwise outlandish accounts.

“The ghost, it seems, is a young boy about fourteen or fifteen years old, with rumpled blondish hair and sad blue eyes . . . They say that the first knowledge one has of the presence of the Thing is a slight pressure on the shoulder, as if someone were leaning over you to see what you might be doing.”

President Taft wasn’t a fan of the Thing. In fact, Taft was so aggravated by the frenzied stories in his office about the ghoul that he threatened to fire the first White House Staff member to tell stories about the Thing elsewhere.

Likely due in no small part to his tragic death, the most commonly reported ghost sighting in the White House has been the presence of Abraham Lincoln. As is widely known, John Wilkes Booth assassinated President Lincoln in April 1865 while he was watching a play at Ford’s Theatre. Since his death, Lincoln’s ghost has been seen by a variety of figures from American political history.

The first to admit seeing Lincoln’s Ghost was Grace Coolidge, First Lady to President Calvin Coolidge, who served as President from 1923-1929. Coolidge described Lincoln’s ghost standing in the Lincoln Bedroom, which used to be his office. The ghost stared out of a window. Remarkably, that window faced Virginia, in the distance, where Civil War battlefields once were. The ghost then vanished. Perhaps Lincoln was still concerned by the war he didn’t know was over.

Reports of Lincoln’s ghosts skyrocketed under Franklin D. Roosevelt’s administration, which ran from 1933-1945. Of course, President Roosevelt’s terms were during a period of societal change and unrest, making Lincoln’s increased ghostly presence seem more than coincidental.

First Lady Eleanor Roosevelt saw Lincoln’s ghost on virtually a nightly basis. The First Lady worked in the Lincoln Bedroom late at night, and said she felt his presence there regularly.

Sightings of Lincoln’s ghost weren’t limited to the White House’s residents. Visiting guests have had their share of accounts regarding the former President’s Ghost.

One night, Churchill took a bath. After finishing his bath, Churchill, still nude, left the bathroom. He walked into the bedroom, allegedly to retrieve a cigar. Lincoln’s ghost sat by the room’s fireplace. Churchill, in his characteristic wit remarked “Why Mr. President, you have me at a disadvantage”.

Two years later, in the middle of the night, and in the same guest suite where Churchill had stayed, Queen Wilhemina of Holland heard a knock on her bedroom door. She opened it.

In the doorway, Lincoln’s ghost stood in front of her, top hat and all. The Queen fainted.

Later, in 1961, in an interview with Life magazine, Jacqueline Kennedy discussed her habit of going to the Lincoln Bedroom. There, she’d sit alone and reflect silently among Lincoln’s presence. This practice was a kind of meditation for her, helping her escape from the hectic stress of her life at the time.

Further into the 1960s, another First Lady encountered Lincoln’s ghost. One night, while watching a television special about Lincoln’s death, Lady Bird Johnson, wife of President Lyndon B. Johnson, felt Lincoln’s presence in the hallway. Incidentally, that hallway ran from the west end of the quarters to the east end, where Lincoln’s office used to be.

Another time, a noted White House seamstress, Lillian Rogers Parks, investigated what sounded like pacing on the upper story of the White House. She found seemingly no one there. A fellow White House staff member informed her that the sound was merely “old Abe pacing the floor.”

In 1989, President Ronald Reagan candidly said the only room in the White House his dog wouldn’t enter was the Lincoln Bedroom.

The general consensus regarding Lincoln’s repeated appearances in the White House is that his spirit only appears in times of stress or national crisis. It seems, even after his death, Lincoln strives to help guide the country through great periods of strife, the same way he did in his life.