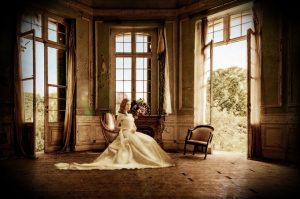 In a previous post, we told the tragic tale of Laura Schaffer of Alexandria. A young lady on her wedding night is killed in a freak accident when her wedding dress caught on fire. The incident, unfortunately, turned her into an urban legend and led generations to refer to her as “The Burning Bride of Alexandria.” However, this story is what’s left after years of rumor and gossip, a game of telephone that went on for almost two hundred years. While this version of the story is heartbreaking, the real thing is even more of a travesty. For the sake of historical accuracy, let’s set the record straight for Laura Schaffer and her beloved. Maybe then her spirit will finally be at peace.

The Story as We Know It

The story — with some slight variations throughout the years — that is told and written about Laura is that she died in June of 1868 on her wedding night. While trying on her wedding dress, she ended up spilling a kerosene lamp on herself. The dress goes right up in flames. Laura understandably panicked, but the door to her room was stuck, and she couldn’t escape. She went on to die from her injuries, and her funeral was held in the parlor on her wedding day.

One version of the story states that the poor girl died minutes before her wedding of the same accident. Her guests were outside mingling in the garden and did not hear her dying screams. Another version claimed she had a 45-foot train on her wedding dress, and that’s what caught on fire as she was trying to maneuver through her home.

The ending of Laura’s life so close to what should have been its happiest day is undeniably tragic, but how truthful is the story?

The True Story of Laura Schaffer

There is a kernel of truth to these legends.

The real Laura Schaffer was the youngest child to Christian and Susan Schaffer, a prominent couple who owned a confectionery shop in Alexandria. After they closed the shop for the night on June 27, 1868, the family went to their upstairs apartment to retire in the evening. Had things gone as planned, the happy family would have spent the evening talking as they prepared the sweets for the shop’s next day. Unfortunately, the night took a sharp turn for the worst.

Laura’s upcoming nuptials to a young man named Charles Tenneson was probably the talk of the family, if not the entire town. Even in the newspapers where their engagement was announced, Charles was regarded for his “kindness of heart and agreeable manners” and that “he had been her constant companion for years.” Laura had never had another beau and wanted no other. They would wed soon, looking forward to a lifetime together.

While getting ready for bed, Laura took a kerosene lamp with her to her father’s bedroom to bid him good evening. It was then that the glass of the lamp cracked, and burning oil splashed onto her clothes. Her Victorian clothes, consisting of the standard hoop skirt, corset, and thick layers of fabric fed the raging fire and prevented her from stripping out of the flaming materials.

Dropping the lamp in her father’s room and causing a fire there, she fled through the house, screaming in pain as the fire caught her skin and hair. Running fanned the flames and by the time she got to the stairs, her mother and brother-in-law tried to help her. He threw his coat over her and was able to extinguish the flames. Her mother was burned in the process while trying to help. The fire in her father’s bedroom was extinguished, though the flames that had reached up to the ceiling.

Laura was covered in 2nd and 3rd-degree burns; parts of her skin were even described as “the consistency of a crisp” by the summoned physician, Dr. Lewis. In the period of time immediately following her accident, made Laura as comfortable as possible because there was nothing they could do to help her. Opioids and painkillers were available at the time, but it’s unknown if they gave Laura any. There’s speculation that she may have had to suffer for over fifteen hours until she passed away at 11 a.m. on June 29, 1868, at the tender age of 26 years old.

As usual, her beloved Charles was there the whole time and was by her side when she died.

Charles, despondent over the death of his beloved, decided to drown his grief with copious amounts of alcohol. With the company of his friend Henry Green to bolster his mood, Charles went to a wholesale liquor warehouse where his friend was a member. Letting themselves inside, Henry pulled two ales, and they drank in stunned silence. Henry was one of Charles’ oldest friends and was horrified at his friend’s loss.

Laura was widely regarded as a pillar of her community, described in the Gazette as a pretty ornament with a large circle of friends and family who were devastated at her tragic passing.

Charles, known for his cheerful attitude previously, quickly became dreary and depressed. Henry just tried to comfort his friend as best he could, but what do you say to a man who just lost the love of his life to such a violent end? When Charles was finished with his drink, Henry grabbed the mugs to clean them.

Behind him, the sudden loud retort of gunfire tore through the air and echoed around the warehouse. Henry turned in time to see his friend’s limp body hit the ground, a self-inflicted bullet wound bleeding from his temple from his Whitney revolver.

Henry summoned a doctor, but Charles’ injury was too severe. The bullet had not exited smoothly but rather bounced around in the skull. Instead of a painless and instant death, he was now dying slowly in a catatonic limbo.

Twenty minutes later, he breathed his last breath, not four hours after his beloved Laura had died.

A story worthy of Shakespeare’s quill, this tale of star-crossed lovers is sadly true. Unfortunately, the story becomes warped over time as details, dates, and people are added or subtracted to make the tale more interesting. Charles is usually never mentioned, or he died later, usually of a broken heart (which is not exactly wrong). Laura always dies in her wedding dress at some point on her wedding day.

Still, their story may not end at their newspaper obituaries. It seems that spirits of both a male and female presence have been felt in the house and nearby properties (business as the candy store downstairs).

It’s believed that Laura is the female spirit, and she has manifested herself over the years to children and adults alike. Children claim to see her in her wedding dress, crying in a corner. Adults have seen the empty kerosene lamp move from room to room after hours, the lamp lit and moving from room to room. There’s been the smell of burning hair. A cold wind will whip past people down the stairs, believed to be Laura sprinting for her life. A woman’s voice was recorded saying “Hello,” to a paranormal investigator.

When the building was a real estate office, a woman claimed that the doors swelled shut on her and she couldn’t leave. Suddenly the door flew open, and a gush of cold air flew past her. She claimed to hear the panting breaths of a person at the bottom of the stairs, but there was no one there.

It seems that Charles did not stay as amiable as he was in life. If people do sense a male presence, he is considered to be angry or inspire feelings of dread. There’s a sense of doom and claustrophobia inside. A male voice was recorded telling a business owner “Enough!” and “Leave!” The candy store has had displays knocked over, and items moved in the night.

Tragedy can sometimes leave a scar on a place, and it may be that Laura’s death was so sad and awful it left an imprint on the very building itself. Residual hauntings can be understood as a “recording” of an event playing on loop. Some of the things reported by witnesses suggest that Laura’s sprint left a literal impression that will “play” when the time is right.

Whether it is a recording or whether Laura and Charles are spirits who try to reach out to people. Their story is one for the ages, and it doesn’t seem that they will be going away anytime soon.

Perhaps after hours, they join each other for a stroll through the town and watch as it changes as time marches on, finally in each’s arms.

Check out more haunted locations, watch a ghost tour from home, or book a ghost tour of Washington D.C. in person at http://dcghosts.com.