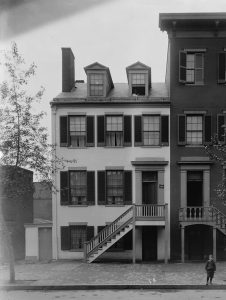 Washington DC is home to many old and historic sites. All of them have seen their fair share of drama and intrigue over time. Perhaps none more so than the Surratt House. Mary Surratt was an austere looking woman, tall, with shiny hair in an abrupt part. That hair became much less neat as she strangled by her own bodyweight pulling tight against a hangman’s noose as she earned the notorious title of being the first American woman to the executed by the Federal Government in the United States.

A house of Confederate spies

This notorious townhouse was owned by her and her husband, and the deeds and conspiracies she orchestrated there earn her the right to be associated with this place for all time.

Located on 604 H Street NW the awkward three-and-one-half stories tall building can generously be described as being in the Greek Revival style. The building was redesigned in 1925 so that the first floor could be used as a commercial space. Which continues to this day.

She and her entrepreneur husband, John Surratt were Confederate sympathizers and ran an inn and tavern in Maryland. They often welcomed Confederate supporters into their establishments talking conspiratorially into the small hours of the mornings.

John Surratt bought the modest house from an Augustus A. Gibson on December 6, 1853. He turned the house into a boarding house. After the death of her husband in 1862, Mary Surratt had to manage his estate, and his unpaid debts and angry creditors. Tired of managing it on her own, and facing financial ruin, she sold much of the estate, settled her debts, and moved to the guest house in Washington D.C. She chose to rent out the inn in Maryland, to John Lloyd, a former Washington, D.C., policeman, and another Confederate sympathizer. Mary Surratt moved into the Washington, D.C. boarding house and ran it as a business.

Mary’s son John Surratt Junior also lived thereafter a short, unsuccessful career as a postmaster. Another Confederate sympathizer and failed seller of vegetables, he and his Mother were suspected of harboring Confederate spies.  Suspiciously she only took in lodgers who were known personally to her or recommended by other people.

One tenant introduced Mary Surratt and her son to John Wilkes Booth. Booth would become a regular at the boarding house. Booth quickly recruited John Surrat Jr into his plot to kidnap and murder Lincoln and the other two most important men in the country. Mary Surratt too was a key part of the kidnap plot that morphed into an assassination. Mary Surrat supplied binoculars, guns, and a mysterious package she later handed to Booth on the fateful night of the assassination at Ford’s Theatre.

The District of Columbia Police arrived at around 2 am on the morning of April 15, 1865. They were searching for John Wilkes Booth and John Surratt. 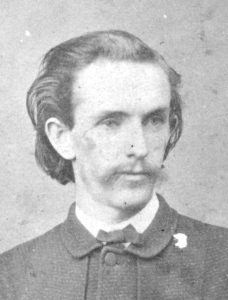 Source – John H. Surratt, Jr. in 1868. Photographed by Matthew Brady of Brady & Co., Washington, D.C. This is an albumen on a carte de visite mount

After the investigation, in 1865, a military tribunal tried all the plotters of the assassination of Lincoln heard several residents of the boarding house testify. The tribunal heard that Surratt had met regularly with John Wilkes Booth and several other conspirators at the Surratt house in Washington D.C. Lloyd informed the tribunal Surratt had asked him to provide a pair of field glasses and several guns to both Booth and David Herold, his co-conspirator. This was the evidence that convicted Surratt and she was sentenced to death. She became the first woman to be executed by the United States federal government. She was executed by hanging for her role as a member of the plot to assassinate President Abraham Lincoln.

Each of the bodies hanged that day were allowed to swing for 30 full minutes, then cut down and inspected by a physician to ensure death had occurred. Her body now lays at Mount Olivet Cemetery under a simple gravestone.  The night of her execution an angry mob attacked the boarding house on 604 H Street NW, ransacking it for souvenirs until the Police stopped them.

The building would eventually be listed on the U.S. National Register of Historic Places on August 11, 2009. The house gained some attention with the release of a film in April 2011 all about Mary Surratt,  it was called The Conspirator and is a good introduction to the story we tell here. This movie was directed by Robert Redford. As for the current use of the Surratt House? Well as of 2016, the shop on the first floor is now used as a Chinese restaurant, with karaoke rooms available upstairs.

Mary Surratt always insisted on her innocence, even while she was swinging from the gallows. In fact, many people believed her. Recently, some historians have argued that she had to have known what was going on in her own house.

“Mary kept her home open to Booth and all the co-conspirators who came to the house”, according to her biographer Kate Clifford Larson.  Larson is quick to point out that people came from all over to go to meetings at the house and some of them even stayed overnight. It would be impossible to not know what is going on. By accounts, Mary Surratt was an intelligent woman too. It seems impossible that she would have no idea of the plot he was cooking up.

Mary Surratt was executed by hanging — her neck was snapped on gallows built especially for the occasion. The gallows were constructed in the courtyard of the Washington Arsenal Penitentiary, which is now Fort McNair. Mary Jenkins Surratt, a widow of 42 and the owner of a boardinghouse on H Street, was convicted and condemned as a co-conspirator in the assassination of Abraham Lincoln.

The military tribunal was anxious to get a conviction. When Mary Surratt was pronounced guilty, the government’s prosecutor hid the recommendation of life in prison from President Johnson, who quickly signed the death warrant. 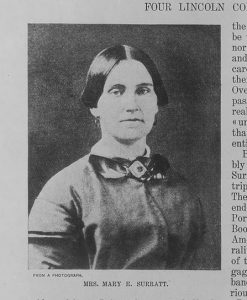 Mary Surratt was sent as a young, fatherless girl to the Sisters of Charity in Alexandria, VA to be educated. She actually converted and became a Roman Catholic proselytizer of noted zeal. Mary also strongly identified with the Southern secessionist movement all of her adult life. Unfortunately, this association did not help her case or let her avoid the noose.

At the age of 17, she married John Harrison Surratt. He was also a rabid secessionist and a debt-ridden drunk. The couple bought over 280 acres of land in Prince George’s County. They built a home there that also served as a local tavern. In addition, their property featured a hostelry, a post office, and a polling place, these collected buildings eventually became a town known as Surrattsville. Surrattsville was in a county where Southern sentiments ran deep.

Abraham Lincoln counted only one vote in the 1861 election. John Surratt was not shy about his fierce opposition of Unionist policies, in short order the tavern at Surrattsville became a speakeasy for people with sympathetic philosophies. Evidence has been mounting that at just 12 miles outside Washington D.C., the Surratt residence was a teaming safe house for the rampant Confederate underground.

John Surratt suddenly died late in 1862, Mary, his wife was burdened with a farm to run. She had little help, Isaac, her elder son had joined the Confederate Army, John Surratt Jr. was also employed as a Confederate courier, Mary found it was impossible for her to keep the family businesses successfully operating by herself. At this point, she began to rent the Surrattsville property out to a Mr. John Lloyd, and she moved to the boarding house in Washington acquired by her husband years earlier.

It is quite possible that Mary Surratt was merely a victim of circumstance. We will never know for sure. Mary can be heard weeping and begging for mercy at her boarding house and the Fort where she was hung from the gallows.

If you are in Washington, DC, you can stop by the Mary Surratt house and keep an eye out for her spirit and your ears open for her weeping. Maybe she truly is an innocent soul condemned to wander the Earth for all eternity.