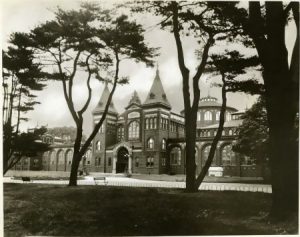 Washington, D.C. is a historic city that is filled with ghosts, mystery and intrigue. Also the capital of our great nation. There are many places in Washington D.C. that are haunted by spirits from tragedies of years past. Almost every section of Washington, DC. has haunted places. Many buildings date back to colonial times, the lingering souls of those unhappy times remain to this day. We take a closer look at an iconic cultural institution in the D.C area, the Smithsonian Castle. 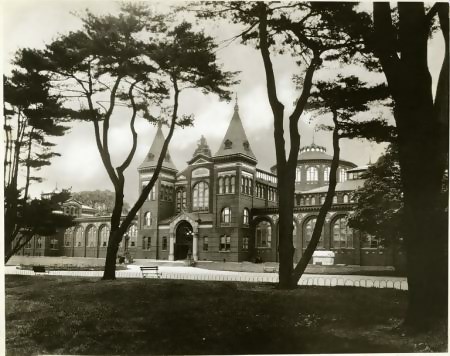 History of the Smithsonian Castle – Bold ambition and a tragic fire

The first Smithsonian building, the Castle, was designed by architect James Renwick, Jr. One of America’s ‘most successful architects’ a dour looking man, trained by his strict father. He was also responsible for St. Patrick’s Cathedral in New York City and the Smithsonian’s Renwick Gallery, also in Washington D.C. The building committee held a nationwide design competition in 1846 and selected Renwick’s design by a unanimous vote. A cardboard model of Renwick’s winning design is still on display in the Castle. Renwick was assisted by Robert Mills, especially in the inside arrangement of the building, although the two frequently argued.

Initially the Castle was intended to be built in white marble and then in yellow sandstone. The architect and the building committee finally agreed on using Seneca red sandstone from the Seneca Quarry, Located in Montgomery County, Maryland. The red stone was hewn by slaves at the Seneca quarry, the anger of their unjust labor pouring into every block of stone used in the Castle. The Seneca was much less expensive than using granite or marble. It was also initially easy to work with and was found to harden to a satisfactory degree upon exposure to the elements. Even if slaves were not involved in the actual construction of the Smithsonian Castle the building started from a foundation of pain.

The building committee went on to choose Gilbert Cameron as the general contractor, and construction began in 1847. The East Wing was completed by 1849 and was occupied by the first Secretary of the Smithsonian, noted academic and pioneer in the research of electromagnetism, Professor Joseph Henry and his family.

This sullen dreamer was an avid fan of science and progress, leading experiments, including one that led to the formation of the National Weather Service.

The West Wing of the museum was completed later the same year. In 1850, a structural collapse of partly completed work raised questions concerning the workmanship and it resulted in a change to modern fireproof construction. The Castle’s exterior was completed in 1852. At this stage of the project, Renwick’s work was completed and he withdrew from further participation. Cameron, however, continued the interior work, which he completed in 1855.

Despite the upgraded fireproof construction, a fire in 1865 resulted in major damage to the upper floor of the building. It sadly destroyed the correspondence of James Smithson, namesake of the Smithsonian, two hundred oil paintings of American Indians by John Mix Stanley, the Regent’s Room and the lecture hall, as well as the contents of the public libraries of Beaufort, SC and Alexandria, VA which had been confiscated by Union forces during the Civil War. The renovation after this disaster was undertaken by a local Washington architect named Adolf Cluss from 1865 to 1867. Cluss went on to stamp his identity on many of the buildings in Washington D.C. He was also allegedly met both Karl Marx and President Ulysses S. grant.

This propensity for communism and his fondness for using red brick in his buildings gave him the nickname ‘the red Architect’, Cluss saw three of his seven children die before him, a tragedy that may have influenced the gothic overtones of his buildings.

While he rebuilt the Smithsonian Castle additional fireproofing work was done. Cluss would later go on to design the neighboring Arts and Industries Building. A third and fourth floor were also added on to the East Wing, and a third floor to the West Wing. The then-novel Electric light system was installed in 1895.

Around 1900, a Children’s Museum was installed near the south entrance. A wide, tiled tunnel was built which connected it to the Arts and Industries Building. From 1968 to 1970 another renovation took place in order to install modern electrical systems, elevators and heating, ventilation and air conditioning systems. The Enid A. Haupt Garden was dedicated in 1987, along with the Renwick Gate facing Independence Avenue, built from more Seneca red stone retrieved from the demolished Washington, DC. Jail.

Being the focus of so much of nations’ history and the subject of so many human passions there are several historical figures that are said to haunt the Smithsonian Castle. The first and most notable presence is the namesake of the Castle and founder of the institute, James Smithson. Smithson was an aristocratic Englishman who was both a chemist and mineralogist. Born in secret in Paris to avoid a family scandal. He was illegitimate and was denied the use of his family’s surname for many years. He never truly found his home and traveled constantly to find somewhere he belonged.

When James Smithson passed away, he left his entire fortune to the founding of the Smithsonian Institute. The incredible irony is that Smithson had never visited the United States of America and would never see the building that would bear his name. After his death, his remains were brought to the United States in 1904 and entombed in one of the main rooms.

His ghost is the one that appears most often in the Castle. In fact, his ghost was spotted so often that in 1973 the chief curator had Smithson’s body disinterred and the casket examined. The skeleton of James Smithson was intact. 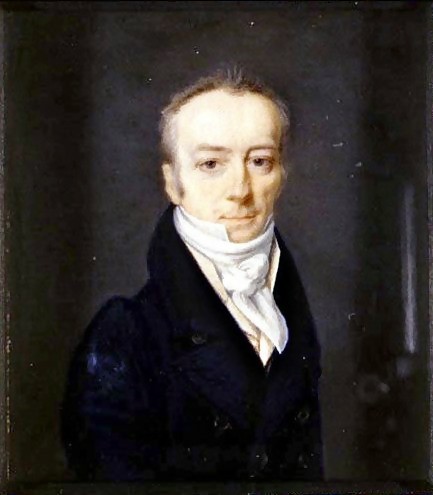 Who else haunts the Castle?

James Smithson is not the only scientist that haunts the building. In 1900 an article was published in the Washington Post. It detailed all of the ghostly sightings at the Castle. Many of the ghosts were believed to be scientists looking to protect their work, or see it to its conclusion when untimely death prevented them from finishing their life’s work.

One ghost is believed to be the first curator, Spencer Fullerton Baird. The night watchman at the Smithsonian Castle reportedly saw the ghost of Baird nightly. When he would approach, the ghost would vanish into the air.

Another spirit that haunts the Castle is that of paleontologist Fielding B. Meek who lived there with his cat. An unhappy man with mournful eyes who lost his father when he was young. He was described as ‘a queer character’ using its old meaning of odd, or eccentric. Scientist and cat lived in a set of tiny rooms under a grand staircase.

Meek was a member of the Megatherium Club, named after a giant extinct sloth that once roamed South America they were an eccentric group of young scientists and naturalists searching for new understanding of the natural world at a time of exciting discovery that has never been matched before or since. They helped build the collections and reputation of the Smithsonian with their raucous gatherings and inquisitive expeditions.

Meek and his cat were moved to a smaller suite of upstairs rooms after the fire. Soon after moving to the new rooms, Fielding descended into poor health and passed away one night, with his cat by his side. He never lost his enthusiasm for conversing with the many scientists who passed through the Smithsonian. He continues to seek out conversations to this day, roaming the halls of the Castle at night.

One of the buildings original residents, James Henry the first secretary of the Smithsonian, has also been known to make a ghostly appearance. Security guards have noticed James Henry, wearing a frock coat, cravat and a starched white collar, wandering the halls of the Castle at night. When he is approached, however, he vanishes.

Where is the Smithsonian Castle?

The Smithsonian is located due south of Ford’s Theatre, near the National Mall, behind the National Museum of African Art and the Sackler Gallery. It houses over 155 million artifacts across the domains of science, art and history and the museum and the national zoo are visited by over 29 million people a year.

Washington D.C. – A city built on a swamp, trying not too hard to escape.

No trip to Washington D.C. is complete without a stop at the Smithsonian. Today the Smithsonian Castle is used for administrative offices and a visitor center. However, there are dozens of other museums and buildings to visit in the nation’s capital. Together these places tell the story of American history, its ambitions, its triumphs, and its calamities. Today, DC is home to many great arts and entertainment venues, quirky shops and restaurants and many universities. You can see more of its great history on the DC Ghosts tour.

And of course, Washington DC will always be the home of American politics. The clash of passions means spirits run high in Washington D.C. and the powerful people who congregate here bring fascinating stories and leave behind macabre tales.

All over Washington D.C. are buildings and neighborhoods with their own fascinating histories, as well as stories of hauntings and people with unfinished business in this world.

Most ghost tours in Washington start out in Lafayette Square, which is also called Tragedy Square. These tours are a great way for you to learn about the magnificent and tragic lives and violent deaths that have left so many spirits in their wake. Learn about the many affairs, duels and scandals that have taken place in this historic city so entwined with the building of the United States.