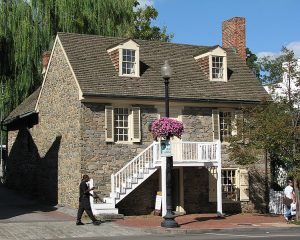 Washington D.C., the Capital of the United States of America, is a place where history and folklore are woven into one unbreakable thread. The first President oversaw its construction and its land was the product of backroom negotiations that still go on to this day. Folklore saved a Colonial Era house from destruction. Now the Old Stone House stands as the oldest building still on its original foundation, with perhaps one of the meanest spirits trapped within its walls.

The History of Old Stone House

It’s the oldest unchanged building in the District of Columbia, the city’s last pre-Revolutionary building on its original foundation. It’s found in the Georgetown neighborhood, which was experiencing a boom of people as the Capital was taking shape, and it became a port for the selling of tobacco.

Built in 1765 by Christopher and Rachel Layman, it is an example of vernacular architecture.

Its thick stone walls were built from stone quarried a few miles away and ballast stone from the hulls of English ships. The ships would ride the Potomac River up to the port in Georgetown, and ballast stones kept the boats at the proper buoyancy. Stones would be offloaded or added depending on the ship’s cargo weight.

The two-foot thick walls of the house were built to conserve heat and protect against the elements. The floor is packed-down dirt. The ceiling is low to conserve the heat from the kitchen hearth.

Since homes were self-sufficient at that time, the land around the house was used to plant herbs, vegetables, fruit trees, and various animals like chickens, cows, and pigs to produce all the milk, eggs, butter, and meat the family needed. African-American slaves would have been farm labor.

The house was added on in three stages, which explains why the inside feels disjointed. Christopher died unexpectedly in 1765, so his widow Rachel sold the property to another widow named Cassandra Chew. Mrs. Chew was a wealthy woman with multiple properties around Georgetown and at least six African-American slaves to her name (as of 1800 tax records).

She was able to add on a proper kitchen and added the second and third floors. The materials used were of higher quality, and the style is entirely different. It feels like you’re walking into a different house altogether when you step upstairs.

The house passed from Mrs. Chew to her eldest daughter Mary Smith Brumley. She was wealthy like her mother and started the tradition of using the home as a place of business. She also owned slaves, at least 15, in an 1826 inventory of her possessions. At least one slave, Tabitha, could buy her and her daughter’s freedom for $201.

African-American’s made up at least a third of the population of Georgetown by the mid-1800s. Without the hard labor they were forced to take on, the town wouldn’t have prospered or grown as big as it did.

The house was spared destruction by an interesting bit of folklore. After the Revolutionary War against the British, America as a new country needed a new Capital. It was agreed that Virginia and Maryland would give up some land to create the new city.

President George Washinton appointed Pierre Charles L-Enfant to design the city’s layout. In 1791, he and the President would hold their survey meetings in Suter’s Tavern, owned by John Suter. Suter’s son, John Suter Jr., was renting a room at the Old Stone House.

For years, it was believed that President Washington and L’Enfant were meeting at the Old Stone House. This prompted a sign to be hung that proclaimed the house to be “George Washington’s Headquarters.” This lore was the reason the wrecking ball never came for the old house.

The house passed through various hands over the years. Many businesses opened up shop inside, such as a paint shop, a clockmaker, a haberdashery (hat maker), and was even the home of a suspected bordello in the early 1900s. The last business it housed was the Parkway Motor Company, a used car dealership in the 1950s.

A petition had gone around Georgetown to save Washington’s survey headquarters, and the National Parks Service jumped in to save the building because of its historical significance. They purchased it for $90,000 (over 800,000 by today’s dollars!) in 1953.

A historian looked into the story and discovered conclusively that the famous meetings were held in Suter’s Tavern. However, the NPS had already paid for Old Stone House to be renovated, making it into a house museum.

The house was returned to its 1800s era architecture and layout. Any additions or changes from the 19th or 20th centuries were removed and replaced with period-accurate counterparts. The parking lot behind the building that sold used cars was ripped out, and an English garden stands there now.

The house was furnished to match the period; at least 85% of the house is period-accurate. Most of the furnishings were donated by Georgetown residents themselves.

The only piece original to the house was the grandfather clock built by John Suter Jr. It had been sold, but the NPS located the clock, bought it and returned it to its rightful place almost 200 years later.

Between modern-day businesses and busy streets, the house stands as a time capsule for curious tourists and students. However, its peaceful visage can lead one astray. After all, one of the city’s nastiest spirits apparently lives inside!

The Spirits Trapped within the Old Stone House

A building cannot exist for over 200 years without some tragedy and death within its walls. There are no real tales that explain the house’s supposed myriad of spirits, though. Over the years, at least 11 different spirits have been seen or heard inside the home, and no real explanation for who they are or why they’re there. Some of these ghosts include:

A woman in a brown dress, a blond man with long hair and a blue jacket, and a  woman in a rocking chair on the third floor have all been seen. There are also two men in Colonial-era clothing, a young girl who likes to run up and down the stairs and an African-American boy, a boy named Joey who plays on the third floor, and a craftsman/carpenter, who might be Christopher Layman himself.

Apparitions seem to be in abundance in the house. Translucent women are seen cooking in the kitchen; a woman with a lantern moves around at night. The sounds of children running and laughing have been heard all over the house. Both the faces of men and women have been seen staring out of the house’s windows.

Electronic Voice Phenomenons have been caught in the house (recordings where noises or speaking are recorded but not heard by the people in the area). These have included grunts, growls, and whispering.

None of the spirits in the home are as infamous as ‘George,’ the meanest and cruelest one of all.

In some stories, he was a murderer in his previous life. If so, that could explain his wickedness.

There have been many stories of George attacking people by biting, scratching, pushing, and choking them. Ladies, be warned: He especially hates women and will attack them first if they enter his third-floor bedroom. There are even rumors the spirit has stabbed someone and sexually assaulted others!

A feeling of dread will follow people around the house while on tour. There are cold spots in the middle of the intense Virginia summer that steadfastly refuse to warm up. This is believed to be George’s icy presence, demanding you leave before he makes you.

The National Park Service turned over Old Stone House to the Rock Creek Parkway and is part of their urban natural area. It’s been a National Historic Landmark since 1973. Because of the neighborhoods and stores around it, the house is now valued at over $7 million!

The glimpse into the past it offers to spectators is priceless, however. Just beware if you’re a woman, and maybe skip the upper levels of the house to be safe. There’s plenty of other spirits crammed into this tiny home you can try to reach out to instead.

Check out more haunted locations, watch a ghost tour from home, or book a ghost tour of Washington D.C. in person at dcghosts.com.