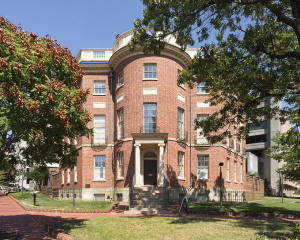 The Octagon House in Washington, D.C. has a fascinating floorplan and an elegant design. Its rich history and important location mark it as a location with many layers to unfold, some no doubt including unhappy spirits that linger on.

The house was once the temporary home of then-President James Madison and his wife Dolley as the White House was undergoing reconstruction due to the fire that burned a good portion of the building and Washington in general during the War of 1812.

Its name comes not, as one might think, from the number of sides to the floorplan, but the number of angles in the building. Apparently, this was more than enough to earn the moniker of being ‘octagonal’ in its day.

It sits at the intersection of 18th Street, NW and New York Avenue. One of the many acute-angled intersections in the somewhat irregularly laid out capital.  The unusual design was to ensure the building would present faces square onto both streets and take advantage of the dramatic corner for the entrance to the building.

A house of some import…

The home was designed as the winter home of John Tayloe III and his family. At one point, he was considered one of the wealthiest Americans of the post-Revolutionary War era. A Virginia native, he bore the weight of his burdens physically, with slumped shoulders and a weary expression on his face. He inherited his wealth and expanded greatly on his father’s empire.

At the outset, he planned on building a home in Philadelphia since it was closer to Baltimore and other major places of personal interest to Tayloe. As word got around of his intent to build, William Augustine Washington III (who was married to Tayloe’s sister Sarah) persuaded John to construct the home on the outskirts of what was Washington D.C. at the time. Today, the home sits in the Foggy Bottom neighborhood of the city. He commissioned William Thornton, who was also responsible for designing the U.S. Capitol building, to design the home for him.

Tayloe was also a relative of George Washington, who was made well aware of Tayloe’s plans to construct the home. It was Washington himself that suggested that Thornton would be responsible for the architecture of the Tayloe home. The home was six-sided, made from bricks, and was designed with some of the most innovative features at the time like a closet for every room including the kitchen. The doors were made from mahogany while the rest of the home was made with some of the finest materials available, befitting a man of Tayloe’s means. Even today the house stands out as luxurious and refined.

The Octagon House was home to John Tayloe III and his wife, formerly Ann Ogle. Ann Ogle Tayloe offered the residence as a place for the French Consulate. The Octagon House was likely spared destruction, during the War of 1812, because of the tricolor flag hanging outside. The British had already burned the White House down. Because of the extensive damage to the White House, James and Dolley Madison were offered the use of the Octagon House. The Madisons paid $500 for six months of rent. While Tayloe III was a Federalist, he was not solidly in Madison’s corner politically. But he remained loyal to his country in the War of 1812 serving as a Colonel in the Virginia Militia, and later on, in the Virginia State Senate. The Octagon House also served as the backdrop for the US signing of the Treaty of Ghent by James Madison, which ultimately ended the war between the United States and Britain.

The Octagon was also home to some of the Tayloes family servants, upon whose shoulders much of the family wealth was built. Residents included Harry and Winney Jackson, the head coachman, and lady’s maid respectively. They were separated from their daughters who were made to work at the Tayloes plantation, Mount Airy in Virginia.

In 1828, Tayloe III died while residing in The Octagon House. His wife Anne would live another 27 years before dying at the house as well in 1855. The Tayloe children would begin to rent out the house to various tenants soon after their mother’s death. At one point, the house served as a school and even was used by the U.S. government throughout the 1870s before it was later reverted back to a private residence for families. It wasn’t until the 1890s when the American Institute of Architects would outright purchase the house in 1898. They occupied the building as their main office until it was named a national landmark in 1960. They built a large modern office behind the Octagon House and restored the building to its original splendor.

Conversion Into A Museum 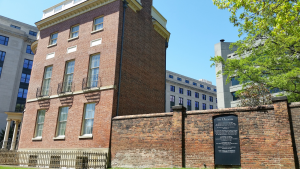 Just ten years after being named a national landmark, the Octagon House was rebranded as a museum. It wouldn’t be until at least 1990 when the home was restored back to its original 1815 look. Since the home was a site of some of the historic events like the signing of the Treaty of Ghent, the Octagon Home was a fixture on the list of notable places for tours of Washington D.C. The museum at one point closed for six years (between 2007 to 2013). Today, the American Institute of Architects offers tours and public programming related to the Octagon House. 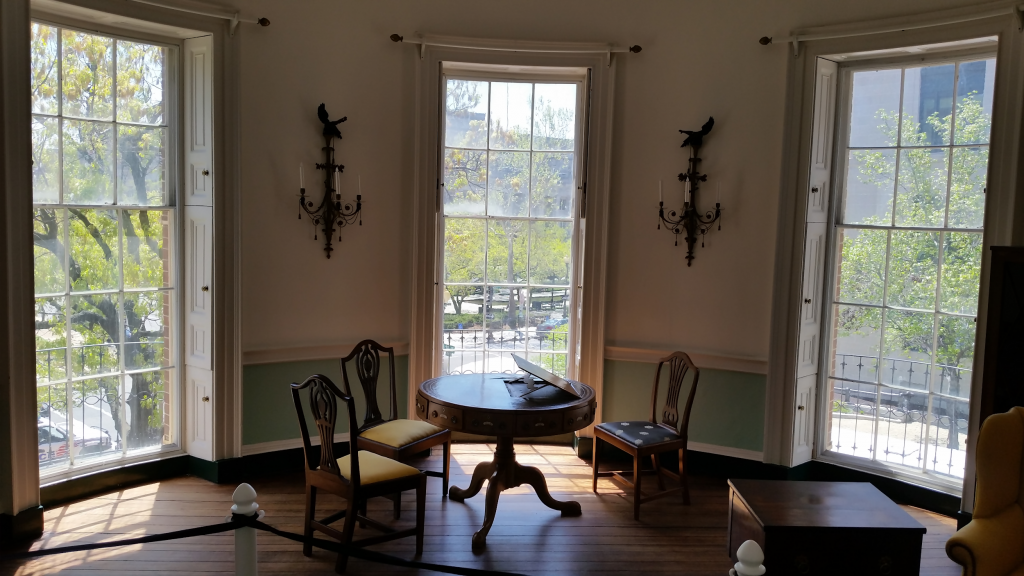 The Octagon House has a rich history and has seen several deaths within its walls.  Aside from the Tayloe family residing in the home, many important residents have come and gone through the years. Since the home was the place where both John and Ann Tayloe breathed their last breaths, their spirits may roam around long after their deaths, ringing bells to summon servants who no longer attend to their desires. One location in particular that has a reputation for frequent unexplained activity was the impressive circular stairwell of the house.

Many visitors recall feeling cold spots and strange feelings as they ascended or descended the stairwell. The second floor and third-floor landings have also been places where specters and paranormal activities may have been reported according to residents and even museum staff. Aside from the Tayloe’s themselves, it was said that two of their daughters may also linger to haunt the home. It was said that one of daughters of John Tayloe III died after a freak accidental fall down the three-story staircase. Some have heard deathly screams at night yet they were the only ones in the house at the time. The earliest report of this ghastly occurrence dates back to 1908.

Another famous presence that is said to be overstaying her welcome in the home is Dolley Madison (who had passed in another house in Washington D.C. in 1849, but lived here for a large part of the presidency of her husband) she is said to be haunting the Octagon House as well as other D.C. landmarks like the White House and the Cutts-Madison House where she lived out her final years.

The first initial reports of hauntings of the Octagon House were said to date back as early as 1888. At that time, the house was already being rented out to various tenants. One night, nearly a dozen men were said to have spent the night here with the intent to scare off any of the spirits that may have occupied the house. Detailed accounts of spirits in the Octagon House were later published in a local newspaper, which was quoted multiple times throughout the 20th century when other publications were writing about the Octagon House.

Soon after the house was converted into a museum, the superintendent at the time was said to have witnessed various lights flickering on or off or having them turn off for no apparent reason with no one at the switch. He also said that some of the doors would open for no reason at all, even on nights when there was no wind reported.

A House with eight lives

The Octagon House may not be one of the most recognized landmarks in Washington, D.C. But the house is definitely a place worthy of its reputation, especially if you happen to be a fan of paranormal activities and ghost stories. This stunning house is layered with history and spirits that can’t seem to free themselves, so they haunt a time that is not their own, causing fear and shock over the years. The museum still holds tours on a regular basis, you would be well advised to take the opportunity to experience this elegant and historic house.