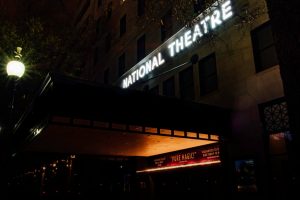 The National Theatre, behind a plain windowed façade on Pennsylvania Avenue, hides the oldest continuously operating playhouse in the country. The National Theatre stages the current crop of popular plays, and classics, as well as the sights and sounds of renowned Broadway, shows just a short walk from The White House.

While watching these live shows, you might see a cameo by an actor whose name is nowhere on the Playbills, but who is a regular presence in the theatre nonetheless: John McCullough. Though he often appears in the theatre, McCullough is not a close friend of Lin-Manuel Miranda or any other present-day theatre or Broadway darlings. He couldn’t be. He died close to a century-and-a-half ago.

Regardless of this minor inconvenience, McCullough’s spirit seems determined to remain at the national theatre, dutifully. What madness compels his ghost to stay is quite possibly as dramatic as any plays on stage at The National.

The History of The National Theatre

In discussing any haunted site, it is important to give the history of the site its due, as ghosts are tied to both the past and the present. Without context, ghosts are reduced to cheap spooks and shallow urban legends, instead of the thread of living history they truly are.

The history of The National Theatre, host to a long list of storied performers and performances, is no different. In fact, the extraordinary legacy of the theatre is likely a motivator for John McCullough’s ongoing residency. What self-respecting actor wouldn’t want to stay in such a continuous hotspot of acclaim and talent?

The story of The National Theatre began close to two centuries ago with a vision for a theatre right in the heart of the capital.

On September 17, 1834, William Wilson Corcoran, an art aficionado, led a meeting of a group of D.C. residents. The group decided that the then-underdeveloped city needed a theatre. They quickly got to work planning and financing the theatre. A year later, on December 7, 1835, The National Theatre opened for the first time, with a production of A Man of the World, by Englishman Charles Macklin a passionate man who killed someone in a vicious fight over a wig at the theatre in Drury Lane, London.

The new theatre was decorated to suit the capital. A recreation of the Declaration of Independence featured among the decor. The stage curtain was painted with a depiction of George Washington.

After its 1835 opening, the theatre endured no less than five fires. It had to be at least partially rebuilt each time. John McCulloch it should be said has no known connection to these fires.

The National Theatre has showcased a who’s who of entertainment icons. In 1850, one act, a P.T. Barnum-backed singer named Jenny Lind (also known as “The Swedish Nightingale”), was so popular with audiences that riots broke out from Washingtonians trying to get into her two exclusive concert performances. President Millard Filmore, his wife Caroline, his entire cabinet, and all Supreme Court justices at the time even took a break from their duties to attend Lind’s shows at the theatre.

In December 1900, Sir Winston Churchill gave a lecture on The National’s stage. He related tales of his adventures in South Africa, and was not well received, nor well compensated, but it did raise his profile in the United States.

In 1957, West Side Story, one of the most famous musicals of all time, had its world premiere showing at The National Theatre.

Since the 1980s, The National Theatre has been home to performances of virtually every popular play or musical, including Les Misérables, Fiddler on The Roof, Chicago, and Cats.

John McCullough and The National Theatre

Despite his comparative modern obscurity, John McCullough factors into the history and mystique of the National Theatre as much as, if not more than, any of the more famous figures named above. His death is the stuff of legend, a harrowing tale that has lasted the test of centuries.

McCullough was a classically trained actor who specialized in Shakespeare. Per the most popular account of how (and where) McCullough died, before his death, he was at The National as part of a touring production.

At the time, the Tiber Creek flowed beneath the stage floor. Though this creek was later closed off, in the 1800s, the water flowed freely and was easily accessible. The creek served as a dingy, subterranean laundry room for traveling companies to wash their costumes, so actors often spent time there underneath the stage.

In this version of the tale, McCullough and another actor were at the underground creek. While preparing for a show there, McCullough got into an argument with the other actor. Depending on the account, the two argued over who was more deserving of either the affections of a beautiful actress in their troupe, or the privilege of a leading role. In all versions, the most important detail is consistent: the argument escalated to a lethal level.

The pair’s arguing turned into a shouting match. Then, with a flash and an explosion, the shouting stopped, abruptly.

McCullough was shot. He staggered and fell, his hand resting in the Tiber Creek. In an ironic twist of tragedy befitting Shakespeare’s work, the actor died beneath the stage, the very place where some of his life’s brightest, most applauded moments once occurred.

Following the shooting, McCullough’s body was unceremoniously buried, late at night, in the dirt-floored cellar under the stage. His murder however was not enough to force his withdrawal from the stage.

The Ghost of John McCullough

Since his death, the spirit of John McCullough has been seen to haunt The National Theatre.

The first sighting of McCullough’s ghost was shortly after his passing. On the opening night of a production, his ghost was seen throughout the theatre. The ghost appeared to be assisting in the last-minute preparations for the opening. The ghost checked the props and scenery. His ghost seemed to be trying to help make sure the opening was a success.

Curiously, the ghost was reportedly dressed in the costumes of his most significant performances. In some accounts of the first sighting of his ghost, the spirit was dressed as Hamlet. Hamlet was McCullough’s first role in Washington. In other accounts, McCullough’s ghost donned the attire of his most famous role, Virginius, the doomed Roman centurion.

One performer who personally knew McCullough witnessed McCullough’s ghost sitting in the audience in an orchestra chair. The ghost was calmly watching the performance.

Over the remainder of the 1800s and beyond, theatre staff reported seeing McCullough’s ghost drifting throughout The National Theatre. The ghost was spotted backstage, on staircases, in dressing rooms, and on stage. Most commonly, the ghost was dressed as Hamlet and seated at the prompters’ table, a hidden recessed stool and lamp for giving actors their lines.

McCullough’s ghost is such an established figure of The National Theatre and its lore that even The Washington Post repeatedly wrote about the spirit.

Per a 1978 article by The Post, a stagehand once found the remains of a “very old gun.” The gun was taken to the Smithsonian for dating. It was estimated to originate from around the time of McCullough’s death.

In the same article, another article from The Washington Post is referenced. The article, from 1896, also discusses McCullough’s ghost. It includes the following account of another actor, who’d known McCullough in his life, witnessing his ghost. The encounter was described as follows:

“His apparition has been observed and recognized over and over again by his personal friends in the theatrical profession. It was seen so recently as one day the week before last, by Frederic Bond, the well-known comedy actor. He was sitting, after the performance, at the prompter’s table . . . when suddenly he heard a slight noise, and looked up . . . After he had sat there a while longer, he felt convinced that he was not alone on the stage . . . he saw a man walk across the stage, and Bond jumped to his feet and cried ‘John McCullough!’

Then it vanished in the wings.”

His ghost is especially active during opening nights of new shows. In all reports, his ghost is benevolent and withdrawn, although startling to any unsuspecting witnesses.

As if in spite of his violent end, McCullough’s ghost is no wrathful, vengeance-seeking wraith. Rather, his ghost represents the ongoing spirit of a man who, in his life, thoroughly loved the theatre and the craft of acting to the point of perhaps wanting to linger in a theatre for perpetuity.

Try to catch a play at The National Theatre and see if you can catch a glimpse of John McCullough for yourself, the playhouse is on Pennsylvania Avenue, on the same street as a certain ivory-hued presidential residence.

While you’re in the area, consider joining us on our DC Ghosts ghost tour. Our tour route starts a very short walk from the theatre. The tour includes even more of the District’s most haunted sites and provides a detailed look into both the history and hauntings of each location.