The Ghosts at the Weems-Botts Museum in Dumfries, VA

HOME » BLOG » HAUNTED PLACES » THE GHOSTS AT THE WEEMS-BOTTS MUSEUM IN DUMFRIES, VA
Posted by blogger in DC Ghosts 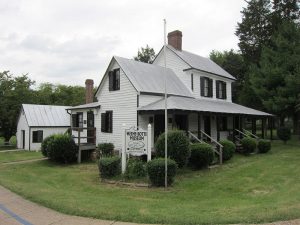 Dumfries, the oldest continuously chartered city in the United States, is little more than a ghost town. A tiny spot of suburbia off of I-95 you could miss if you blinked. It’s hard to imagine that it used to be the second-largest and most important port city in America in the colonial era. Now it’s a shadow of its former self, but the town is getting some attention again. The Weems-Botts Museum is considered one of the most haunted places in the United States, after all.

The History of Dumfries

Once a custom house and warehouse were built in the town in 1731, they exploded in goods shipped. Dumfries became a boomtown overnight, lasting from the late 1700s-early 1800s, and shipped out enough volume to rival ports like Boston. Ships came from all over the world: England, France, Scotland, Holland, even the West Indies brought in manufactured goods in exchange for wheat, lumber, and tobacco.

The Scottish merchants who operated out of the city had it chartered in 1749, and it’s been the longest continuously chartered city in the United States. It was named after the homeland of the merchant who owned the land and was the first chartered town in Prince William County.

Eventually, the good times came to an end when the shipping canal filled up with silt, blocking the way for ships to enter and leave the port. The rich and fertile farmlands around the town had been stripped due to short-sighted farming practices. After that, it was only a matter of time for  Dumfries to fade into obscurity.

Ironically, it seems the ghosts of the Weems-Botts Museum might be bringing some life back to the town.

The History of the Weems-Botts House

Reverend Mason Locke Weems came to Dumfries for a change of pace. Barely making any money at his last church, he decided to become a writer.

He purchased the old warehouse (and former church poorhouse). Then, he ended up creating a great legacy for himself with his biographies of important men. His personal hero was George Washington, but he also wrote biographies for Francis “Swamp Fox” Marion and even Benjamin Franklin. What made his books unique were the ‘creative liberties’ he took with the lives of these celebrities. He was the one who infamously created the myth of George Washington cutting down the cherry tree.

Historians know that he embellished and made up stories for his heroes, but they looked past these embellishments because they simply made the founding fathers that bit more interesting. These could be considered tall-tales, like Paul Bunyan and his blue ox Babe.

The second owner of the house was a celebrated defense lawyer Benjamin Botts. He was famous because of his part on the defense team of Vice President Aaron Burr’s treason trial. Botts died in the Richmond theater fire of 1911.

A Life of Suffering at Weems-Botts House

Richard Merchant bought the house for his wife and two daughters in 1869. He lived there with his wife Annie and two daughters, Violet and Mamie. Mamie, unfortunately, was ill with what historians now believe was epilepsy. Unfortunately, this was not a good time for epilepsy victims; there was no cure, no medicines for treatment, and many times they ended up in state hospitals or asylums because the seizures were seen as madness or even demonic possession.

Like many others, Mamie was locked in her room, unable to go outside or leave the house for fear of having a seizure in public. For 23 years she suffered in that room until a suspected seizure killed her. Her father died before her, so her mother Annie was now alone in the house.

Violet had moved away and was setting up a house with her fiance when her mother demanded she return to care for her. Violet was forced to leave the life she had barely started to come back home to care for Annie. Neighbors said they could see her pacing around the house at night, and loud sobs could be heard.

If Violet thought her mother might move on soon, she was tragically mistaken: Annie lived for another 46 and died in 1952. Violet moved between the house and a nursing home, living until 1967.

It’s believed that the haunting in the house can be attributed to these suffering sisters.

Mamie was treated like a dirty secret and Violet lost her own lifetime of happiness to caring for her mother. If ghosts are the spirits of those with unfinished business or awful lives, it makes sense that even death can’t seem to free them.

The Paranormal Happenings at the Weems-Botts Museum

The house was set to be demolished but Dumfries saved the house for its historic value. It was bought and renovated to make it the Weems-Botts Museum, which opened in 1976.

During the renovations, strange things started to happen. Renovations oftentimes seem to stir up spirits; they may not know they are dead and suddenly strangers are moving in and changing everything.

Case in point, a doorway was plastered over and a bookshelf was installed, but the books would fly off the shelves. Not fall off; they were thrown with great force across the room. It was determined that the ghost doesn’t want the doorway blocked. Once the shelf was moved and the doorway reopened, the books did not move anymore.

Sounds can be heard from the upstairs where Mamie lived. Loud female screams erupt from nowhere and footsteps pace around. Curtains would flutter with no windows open; a picture would come off the wall and be found either on the floor or propped up in a chair.

One window in Violet’s bedroom will open and close itself all hours of the day and night. Volunteers will find the window open at the beginning of their shift when it was closed the previous night. One time a high school student visitor was talking to the docent when the window opened next to her. The docent told her it was just “the ghost saying hi.” When they looked back later in the conversation, the window was closed again.

There’s a small doll that would constantly move around the room. It would move overnight so frequently that a docent asked aloud: “Can you please leave the doll alone?” The doll has not moved since then.

There was a creepy story in what was Mamie’s room. A Marine Scout Leader and his troop of Boy Scouts were touring the upstairs when they stepped into her old room. As the docent was giving her talk, she noticed the man was reacting badly to something unseen in the corner behind her. He was sweating, face pale and eyes wide in terror. “She…she needs her rocking chair…” he managed to stutter out before bolting out of the house.

The docent had to lead the man’s troop back outside, and he refused to reenter the house. Later on, the manager reached out to a living family member who confirmed that Mamie would rock in her rocking chair for hours, looking outside to the world she could never visit.

Most of the time, ghosts are hard to catch on camera or catch their audio as EVPs (electronic voice phenomenon). However, it seems that the ghosts of the Weems-Botts Museum are usually happy to oblige, especially when cameras are rolling.

The TV series Dead Files did a whole episode on the museum, called “Widow’s Revenge–Dumfries, Virginia.” And The Biography Channel had a spot on “My Ghost Story” talking about the spirits there.

At first, the tours given at the museum would not mention the strange things that happened there, unless a guest asked directly, or they saw something. However, the TV shows seemed to help revitalize interest in the museum and the town around it. Now, every October, Historic Dumfries holds a ghost lock-in, encouraging people to try and stay the night.

Apparently, nobody has managed to stay past midnight. Think you can?