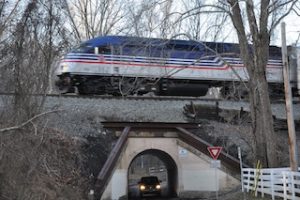 What do you do when you find yourself in the town of Clifton, Virginia on Halloween night?

You head down the one-lane winding road to the creepy concrete tunnel called the Colchester Overpass in your GPS. Ask anyone, however, and they’ll tell you it’s also known as the Bunny Man Bridge, after the serial killer. The single-lane tunnel underneath a train track might seem a bit anticlimactic when you first see it, but remember, it’s not midnight yet.

Once the clock strikes twelve, you summon the infamous serial killer, the Bunny Man,  by saying his name three times. His ghost appears in a white bunny suit stained with blood. He wields an ax and hates trespassers.

The police find you hanging from the nearby trees the next morning. The Bunny Man has struck again.

It may seem like a strange choice for a slasher, but yes, the town of Clifton supposedly has such a creature haunting the Colchester Overpass. The stories started in the 1970s and have grown from there. In fact, there are several different stories claiming the Bunny Man’s origins.

As the Joker once infamously put it: “If I must have a backstory, let it be multiple choice!”

Seems that the Bunny Man read Batman comics because there are several variations on how he came to be. Here are a snapshot of some of the creepier tales:

Folklorists generally agree that an Urban Legend must have a kernel of truth to its tale and must be told through oral or chain storytelling. People have been talking about the Bunny Man for 30 years, so it has mutated over those decades. There are some themes that continuously show up: rabbit suit, attacks with axes, likes to attack trespassers. So, what could the possible kernel of truth be for this bizarre rabbit-themed murderer?

There’s no way this is based on anything true, right….?

The Truth of the Bunnyman

Brian Conley is a historian-archivist for Fairfax County and was so intrigued by the legend he delved into reading police records and newspaper reports for 8 years to try and find anything solid. He managed to find a research paper from 1973 by Patricia Johnson called “The Bunny Man,” where she interviewed 33 other students about what they knew about the legend. She was able to show that there were 54 different versions of the story as told by the students. Most mentioned attacks on cars, the rabbit suit, a hatchet or ax.

Using Johnson’s paper, Conley was able to piece together a timeline to work on and that’s when he made his big breakthrough. Amazing, a story in the local paper from the 1970s showed a story about a  man in a rabbit suit throwing a hatchet at a couple in their car!

In Burke, Virginia, Air Force Academy Cadet Robert Bennett reported to the police that a man in a white bunny suit yelled that he and his fiancee were parked on private property. He claimed he had their tag (license plate) number. Then, he threw his hatchet through the window of the car and “skipped away” into the bushes. Luckily no one was hurt, but the police had the weapon. Now they just needed to put out an APB on the Easter Bunny.

Two weeks after attacking Bennet and his fiancee, another rabbit showed up on the same road and was vandalizing a new but unoccupied house. Paul Phillips, a security guard for the construction company, found this bunny taking a long-handled ax to the house’s front column. “All you people trespass around here,” the bunny said. As Phillips tried to talk to him, the rabbit man threatened to bust his head open. Phillips went to his car for his handgun but the rabbit was gone once more.

The Bunny Man never made a reappearance, but it seemed an “Axe Man” (he called himself) did call up the construction company Kings Park West Subdivision and accused them of dumping tree limbs and construction debris on his property. Throughout all of these incidents, he really made sure to hammer home the concept of property and who owned what.

Conley theorized that a young man saw his rural farming community of Fairfax was being heavily changed and he lashed out. Seeing the extensive development, he decided to try and scare away the people and builders with his hatchet-rabbit act.

Sounds like he was a fan of Scooby-Doo, huh?

So, the Bunny Man was a real-world villain that was never found nor identified. A creepy incident started making the rounds as a legend fairly quickly, and as people heard it, they added to the scares. While the original Bunny Man did not hurt anyone and was only guilty of vandalism, his legend takes quite a hard turn into the terrifying. Escaped convicts, angry ghosts, dead animals reminiscent of the 1980s satanic panic; it’s the perfect story for slumber parties and campfires.

The Bunny Man may be a myth, but mythology influences people every day. Back in October 2001, an interesting movie hit theatres: Donnie Darko. Donnie’s (played by Jake Gyllenhaal) world is turned upside down when a giant man in a bunny suit named Frank, that no one else can see, tells him that the world is going to end in 28 days. The terrifying visage of Frank helped propel the movie into cult status. There are some people that think Frank was inspired by the Bunny Man: the movie takes place in the fictional town of Middlesex, Virginia, after all.

In 2001, Fox’s TV show “Scariest Places on Earth,” had an episode (season 2, episode 19) about Urban Legends, and one they featured was about the Bunny Man Bridge. That probably brought in the tourists, making the little town of Clifton a popular place to visit.

There are paranormal investigators who have seen shadows move and caught voices on audio-recorders. None have seen the Bunny Man in the flesh, so to speak.

So far, the Bunny Man seems to be good for business. But you may want to think twice about trying to summon him on Halloween…he’s pretty good with that hatchet, after all.

Interested in your local ghosts and creepy tales? Check out the link to the DCGhosts site for Ghost Tour information: