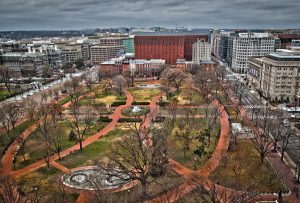 If you are living in the United States, chances are you have heard of Lafayette square Park and its ghost. It is a popular and historic park that you can find directly to the North of White House. If you have ever visited Washington D.C. you have likely seen this park. It also houses the iconic statue of Andrew Jackson at the battle of New Orleans, on a horse dramatically rearing while Jackson holds his hat in his hands. This park is ringed by some of the most tragic and historical houses in America, however, it holds a few secrets of its own.

What is Lafayette Square Park?

Lafayette is a very popular park that is located to the rear of the White House. It is a seven-acre park that is open to the public. It is technically located within the bounds of President’s Park. The park was named after a man named Gilbert Du Motier, Marquis de Lafayette. He was a French hero of the American Revolutionary War commanding America Troops in several decisive battles, including the Siege of Yorktown. Lafayette was shot in the leg during the battle of Brandywine, near Philadelphia. Injured legs will feature later in our tour of the park.

The park also has several statues including one of Gilbert Du Motier Lafayette. The other famous statue in the park is Andrew Jackson on a horseback, the first bronze statue cast in the United States, and the first equine statue in the world to be balanced solely on the horse’s rear legs. This park is part of the National Historic Landmark District. It was included in the register in 1970. 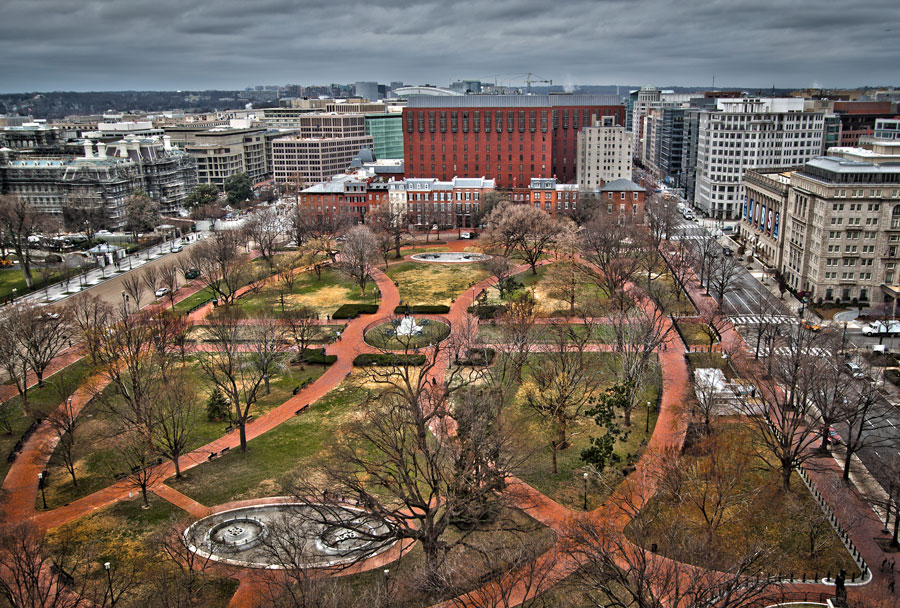 A tragic murder in the square

Lafayette Park was also known as Tragedy Square. During its storied and often macabre history, the park was used as a graveyard, a zoo, an active slave market, a modest racetrack, and an encampment for soldiers during the War of 1812. It was also used for many political celebrations and protests.

Philip Barton Key II was the son of Francis Scott Key, an author, poet, and lawyer who wrote the lyrics to The Star-Spangled Banner.  Philip had come to the park for a romantic assignation with the wife of Rep. Daniel Sickles, Ms. Teresa Bagioli Sickles, a dour but passionate woman who felt justified seeking affection elsewhere in the face of several public infidelities by her congressman husband.

The signal for the assignation was a string left hanging in the window of a lowly house rented nearby expressly for the purpose of the continuing affair between Francis Scott Key and Teresa Sickles.

Rep. Daniel Sickles received an anonymous note that evening, from ‘R.P.G.’ alerting him to the infidelities of his wife. The note speculated that ‘Barton Key has had as much use of your wife as you have’, Sickles anger was roused.

Sickles confronted his wife later that month and extracted a detailed confession from her, that night they slept apart, her sobs keeping the whole house awake.

Sickles felt his reputation ruined, cuckolded by his wife, he missed the obvious inequality of the situation, choosing to ignore his many public dalliances.

Just a few days later, on Sunday February 27, 1859 Sickles approached an upper window at which his wife was waving to someone, looking out he saw Philip Scott Key II waving a handkerchief from Lafayette Square.

Key, unaware that Sickles knew of the affair waved politely and walked over to the house, the two gentlemen were known to each other.

Meeting cordially in the park, the extended hand of Sickles contained not a just a friendly palm, but a pistol cocked and loaded.

Philip Scott Key protested for his life but was mortally shot, in cold daylight, in front of many onlookers, including soon, the police, to whom he surrendered.

The first case of temporary insanity in the USA.

Philip Barton Key was unarmed and shot three times. Philip had begged and pleaded for his life. Daniel Sickles was charged with murder after the incident; however, it didn’t end there. Daniel was the first person in the United States to claim temporary insanity and have it successfully used as a legal defense. Before Daniel, many people claimed temporary insanity, however, no one had been able to make the defense work, Rep. Daniel Sickle employed the finest legal minds in Washington to craft his defense and got away with murder. It was also a popular trial, followed closely by the media, in which Sickle played up the affair between his wife and Philip Barton Key.

But the tale grows stranger, Daniel Sickle withdrew from public life, but not public office, and went on to command the III Corps of men in the battle of Gettysburg, which led to a military disaster. Sickles had gone against his orders. Not only did he get his battalion destroyed, but he had a leg severed by a cannonball shot.

He had the leg amputated, preserved, and sent it to an Army Medical Museum. The note with the leg stated with the compliments of D.E.S.  – Major General. The leg is still in the museum today. However, it is said that Philip Sickle haunts the park on the streets where he was shot. Limping around pursued by his own failure and running around the square forever, pursued perhaps by Philip Barton Key, seeking revenge! 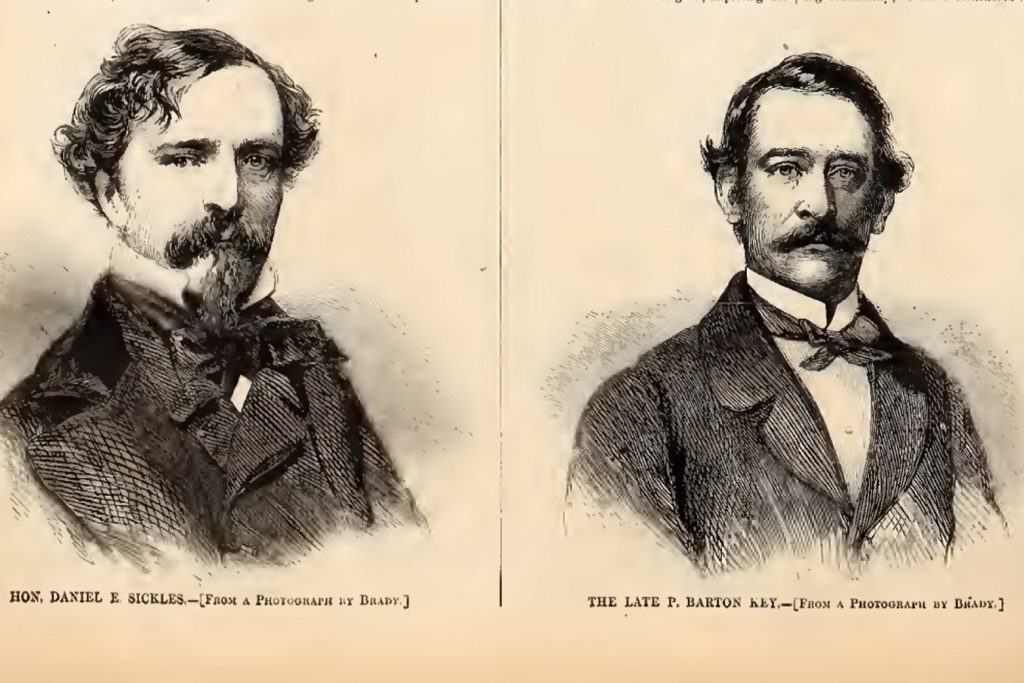 Although losing popularity as a way of settling disagreements, pistol duels were still common in 1820. In fact, they were so common that it led to a shortage of military officers.

The victim of one unfair and unjust such duel passed away at a The Decatur House of Lafayette square.

The Decatur House is actually one of the oldest surviving homes in Washington, D.C. It is also one of only three remaining houses in the country that were designed by renowned neoclassical architect Benjamin Henry Latrobe. Built for Commodore Stephen Decatur, the naval hero, leader of men, and a national icon who still paces the Decatur house.

Decatur had a long-running, public and international quarrel with Commodore James Barron, who was already under court-martial and was judged by a jury including Decatur. This was due to the fact that he had been ill-prepared in battle and was forced to surrender his ship, the USS Chesapeake to the British before the start of the War of 1812.

Barron was then suspended from the Navy for five years without pay, and stranded in Sweden without the means to support himself.  Decatur and Barron had an open exchange of elaborate insults and Decatur enjoyed bad-mouthing Barron to anyone who would listen, unaware he was stranded. This caused a lot of bad blood between Decatur and Barron.

Once Barron had been reinstated, he had enough. It was at this time that he thought a duel would solve his problems. They dueled on March 22, 1820. Both men had hit their intended target, however, only one had survived the ordeal. Decatur died the following day at his home at Lafayette Square.

About a year later, people believed that they had seen him staring out the window. He was thought to be walking out of the house holding dueling pistols. The sightings were reportedly so bad that the windows in the home were bricked up.

St John’s Episcopal Church is also known as the church of the presidents. Also designed by neoclassical architect Benjamin Henry Latrobe. He saw churches as places of meeting and prayer, where discussion and open dialog were to be promoted. Thus, the open and column-free Greek cross design extended later to a Latin cross to house a growing congregation. It opened in 1816. Every president since James Madison has attended a service here at least once in their life. Even President Trump, somewhat controversially. However, there is more to this little church than you may think.

It is said that when the Church’s bell tolls to commemorate a prominent person’s death six figures will appear. They will gather on pew 54, the president’s pew, appear in white robes at midnight and quickly vanish after. It is said that the men are paying their respects.

Perhaps they will glance at the 18th Century bible on the president’s pew, which has been autographed by many of the visiting presidents and is a precious relic, among many others owned by the church.

The bell which weighs nearly 1000 pounds and was cast by Joseph Revere, Paul Revere’s son.

Within earshot of the Church of St John’s is the Octagon house, designed by William Thornton. It was designed so that the exterior walls would be parallel to New York Ave and 18th Street. These streets meet at an angle. Making an octagon plan a possible solution, however, the building only has six sides, but eight angles – enough to classify it as an octagon in the parlance of its day. The building is centered around a circular room.

It was constructed as a gesture of support for the new capital, and its sponsor, George Washington by wealthy plantation owners John Tayloe with his wife who wanted to build a winter townhouse. At the time Lafayette Square was a newly established area. Washington had wanted to attract prominent residents into the district. This home was built in 1799.

The manifestations of the haunting of this house are all the bells in the house would regularly ring at once, with no apparent cause. A skeptic was invited over for dinner and she witnessed bells ringing. She went to investigate and was seen being lifted clean from the floor. In another instance, a General named Ramsay was having dinner in the Octagon house. Suddenly all the bells in the house had begun ringing violently. The General had gone to investigate; however, when he held the ropes that controlled the bells they still would not be silenced.

Lafayette Square has layers upon layers of history, human life, and the inevitable suffering and loss that accompanies it. It is richly intertwined with the history of the United States and the strong personalities involved in forging its identity.

At the center of this remarkable town is Lafayette Square, bordered on all sides with restless spirits that wander the houses and squares. Unjust executions, unfair duels, the kept misery of slaves, legless Commodores limp around this leafy and serene square. Under the clam watch of Andrew Jackson and his horse.