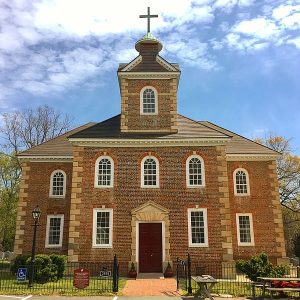 Aquia Church in Stafford, Virginia, is located off of Jefferson Davis Highway and Highway I-95. This unusual church is unique in both design and history and has survived a fire, wars, and a murder most foul.

Before Aquia Church stood the Overwharton Parish from the 1680s, which became known as the Potomac Church, the newer Aquia Church was built in 1751, housing the new Episocial congregation that had been meeting since 1711. It’s of the Georgian architectural tradition, but it also has some unique features.

First of all, it’s an example of Greek cross structure. This type of church is built in the shape of a cross when viewed from above. The church also has a full second story. Both of these things make the church a precious historical landmark and are unusual in colonial architecture. It was placed on the National Historic Landmark Registry in 1991.

Thomas Jefferson and George Mason were church members, while George Washington had ties to people who attended there.

In 1745, George Washington’s half-brother Lawrence led the Stafford residents in a campaign to help fund the Aquia Church’s rebuilding. He was the owner of the local ironworks known as Accokeek Furnace. He got the citizens to band together and petitioned the House of Burgess from taxing them for rebuilding their church.

After being built in 1751, it burned down in 1754. It was rebuilt inside the shell of the building in 1757. It was shut down from the Revolutionary War until the Civil War due to lack of funding. Then it was opened back up as a stable, campsite, and hospital for Union forces.

Aquia Church had a silver communion set dedicated in 1738. Like the church itself, the collection has become a symbol of the Church’s resilience against the odds. It was buried before the American Revolution and survived the War of 1812 and the Civil War before being found. The set only comes out for service on Heritage Day and Homecoming services (May and September). It’s still an active church to this day.

The Murder in Aquia Church

In the mid-1700s, a young blonde woman traveled the dark country roads of rural Stafford county when a highwaymen group accosted her. This period was rife with uncertainty exasperated by the war and lack of resources, food, and money. Men would wait alongside roads to steal the valuables from people walking or riding by their hiding spots.

She ran from the men to the sanctuary of a local church. She only managed to hide for a little while before they broke inside and murdered her in cold blood. Her body was hidden in the vestry (a bell-less church tower). The men who killed her were never caught.

After the Revolutionary War ended in 1775, Aquia Church was ready to start services again. It was a total shock when the church members discovered a corpse hidden in the vestry. It was obvious the woman had been there for years, decades even at that point. She was nothing but a skeleton, with a full head of beautiful blond hair.

Blood spilled on the vestry floor from her murder could never be removed. Despite using every trick in the book, the bloodstains remained in the tower for well over a hundred years. It was only then, during a restoration period was the blood covered up by concrete.

The details of her life, death, and murder are unknown. It’s strange how long she was left in the vestry. It had certainly taken many years for the church to find her, so it would make sense that the woman might find herself attached to the Church since her death.

The Hauntings of Aquia Church

Such a tragic story seems to be the perfect fodder for a spooky little ghost story. After all, it’s commonly thought that tragic, sudden deaths can cause a person’s spirit to stay behind. They either don’t realize they are dead or are angry and have unfinished business, sometimes revenge, that needs to be met out to move on.

Strange things have happened in the church ever since the discovery of the woman’s skeleton. Members of the church have mentioned hearing footsteps walking around at all hours of the day and night. The footsteps will break into a frantic run around the church at night, but no one is there. Noises can be heard in the vestry; some are saying it sounds like a struggle. There’s sometimes a groan, a whistle, or even a call for help.

Several people have also mentioned seeing a transparent woman in the church’s windows, on the balcony, or even in the graveyard. The church members have dubbed her Blond Beth due to the hair of the skeleton found upstairs.

The haunting is frightening enough that many people avoid it at night when the activity gets stronger.

In the 1900s, brave people would try to stay overnight at the church but were chased away by an “unfriendly presence.” A custodian working in the graveyard saw a ghostly woman’s face floating above the graves. Another man saw a woman smiling at him through the balcony windows before she vanished.

In the 1990s, there was a celebration of Aquia Church’s bicentennial anniversary. The church invited a group of Civil War reenactors to pitch their tents on the church’s lawn between the graveyard and church building. They planned to stay from Saturday night until Sunday. The next morning, Father Kerr of the church spoke with the group before church services began.

While talking about their plans for the day and asking how their night had gone, a few group members admitted they had a strange incident the night before. A man explained to Father Kerr that he had witnessed a red-and-orange flickering light in the vestry. It swayed back and forth and had flickered on and off the entire night. Other people confirmed they had seen the light too.

One person jokingly suggested it “was the ghost.” Then he told the Father to check out the lightbulb in the vestry–it was probably loose in the socket, and that’s why the light had been flickering all night.

Father Kerr just smiled at the group. He explained that the light was probably from Blond Beth, the church’s ghost, without missing a beat. He thought she might have been curious about the Civil War soldiers camped on the lawn of the church and why they had returned after a full 200 years since the war had ended.

He also explained to the shocked group that it certainly wasn’t a lightbulb they’d witnessed all night because the vestry had no electrical wiring or lights!

The Church in the Present Day

Aquia Church is still in use today. They give tours to those who make appointments and still hold services. They are the oldest functioning church in the county and plan on staying that way.

They advise that if you want to check out this beautiful and unique building, book your appointment during daylight hours. Just so that you aren’t frightened by Blond Beth running past you in the church as she has been doing for centuries. Maybe you’ll get lucky and see her smile at you from the windows.

Check out more haunted locations, watch a ghost tour from home, or book a ghost tour of Washington D.C. in person at https://dcghosts.com