Gadsby’s Tavern and the Tomb of the Female Stranger 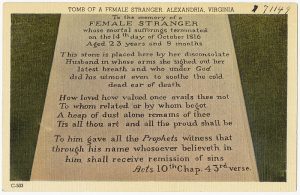 Gadsby’s Tavern and the Tomb of the Female Stranger

Gadsby’s Tavern and Museum is an unusual place, in that it’s been serving its clients since before Virginia became a state. It opened in 1785 and the Commonwealth was awarded statehood in 1788. It consists of two buildings, the tavern and the larger hotel that was added in 1792. For over two centuries it has been serving its patrons, and more than a few celebrities. Being in operation for that long, it would make sense that there would be some ghostly clients who never checked out of the hotel.

The History of Gadsby’s Tavern and City Hotel

Before the country had the capital of Washington, D.C, Alexandria was hub for business, politics, and social gatherings. It was situated on the Potomac River as a port city and was on the new national highway. The Royal Highway was a route that led straight up to the current Capital of the new United States: Philadelphia, Pennsylvania.

In 1782, John Wise bought the corner lot and opened up the tavern in 1782, during the post-Revolutionary War economic boom. Its location in the business district meant it became a local watering hole for the men at the highest positions of power. Not only did George Washington frequent the tavern, but also Thomas Jefferson, James Monroe, James Madison, John Adams, and the Marquis de Lafayette.

In 1792, Wise added the three-story hotel and ballroom to the tavern, to bring in distinguished guests from all over. He named it the City Hotel to emphasize the point that this was the place to hold weddings, parties, banquets. He spared no expense on its creation, with an upper-class dining room on the first floor, a huge ballroom on the second, and the third floor was home to a high-end hotel. The ballroom was the real work of art in its elegance, and so it saw its share of famous events. George Washington celebrated his birthday at the tavern in 1797 and 1798. In 1799 he gave the last review of military troops on the tavern’s steps and gave his last order. Thomas Jefferson held his 1801 inaugural banquet there in the ballroom.

In 1796 Englishman John Gadsby bought the property and became wealthy from the income of the tavern and hotel. He ended up housing the infamous couple that led to the most famous haunting in Old Town: the Female Stranger.

The Infamous Story of the Female Stranger

There is one story in particular that Gadsby’s is well-known for, that of the Female Stranger. In all versions of the tale, a couple arrived in Old Town from a ship from the Caribbean. The woman was wearing a black veil and was incredibly sick.

They hired a carriage to take them from the port to the City Hotel. They appeared to have wealth, and while the woman was remembered for being beautiful, she was incredibly sick. Her husband took her to Room 8 but jostled the doorframe on his way in. The 8 was knocked over and became the infinity symbol, an unfortunate glimpse into the future.

The man’s strange behavior started when he called for a doctor and two nurses but refused to give his name nor the name of his female companion. He would not even tell the attendant of the hotel their names. In fact, he made anyone who met them take oaths of secrecy to never reveal their identities. Unfortunately, the doctor could not cure her, and she died three weeks later on October 14, 1816.

Her husband borrowed money from a local man to pay for a beautiful tombstone, and she was buried at St. Paul’s Cemetery, off of Duke Street. The stone face was carved with a beautiful poem, and her only identity was that of “The Female Stranger.”

However, he skipped town after the funeral, leaving his beloved and the debts they had incurred behind. Despite their frustration with losing out on money owed to them, those who took the oath held it. To this day we have no idea who the couple was, but there are certainly a variety of theories.

Some speculated she was Theodosia Burr, the daughter of Aaron Burr, (the man who killed Hamilton in the infamous dual). Theodosia was supposed to be dead four years at sea at the time, but fact rarely puts off a good story.

Others suggested she was a wealthy English woman who had run away from her husband and ran off to the States with a penniless lover. That could explain why he had left without paying anyone their due. Still, and most strangely, was the theory that she was actually Napoleon Bonaparte, hiding in plain sight with his lover…

And we thought tabloids today were far-fetched!

Ghosts seem to happen because someone died unexpectedly or they either have unfinished business on this plane of existence. Sometimes they are simply echoes the past, and are called a “residual haunting.” This would be the case if someone saw a ghost run down the stairs at the same time every day. The ghost does not interact–it is almost a recording of an instant playing on repeat. If you find yourself with a spirit that seems to interact with people or objects, then it can be classified as an “intelligent haunting.”

It seems that the Female Stranger is considered an intelligent specter. People see her apparition appear and disappear around the Tavern and the Hotel. Sometimes she flits into the ballroom during parties or looks out longingly of the windows of Room 8. Patrons have gone to speak to her only for her to disappear into thin air. Sometimes soft crying from a woman can be heard from Room 8, or elsewhere in the museum.

There have been several instances of candles being lit and moved around. One patron explained to the manager that a candle had been left lit in a lantern at the end of the day. When the manager went to check the room, the lantern was not lit, but the glass was burning hot as if it had just been blown out. Some think she is trying to bring her husband back.

One server told the story of literally running into her apparition while carrying plates from the dining room. She dropped everything to the ground, and let out a screech as she ran away. The phantom simply disappeared. Another waitress asked in the kitchen where the napkins were and a package knew out from a shelf and landed next to her.

The Female Stranger has never been described as angry or malicious. She simply is as part of the museum as much as the Georgian architecture.

Gadsby’s had some struggles over it’s tenure.

Owners came and went over the years, and the buildings changed as well. The extra spaces in the hotel were rented out as lawyer’s offices, an auction house, and were probably used as a hospital in the Civil War.

By the time of 1917, the Metropolitan New York Art Museum negotiated to take pieces from the hotel to preserve parts of its architectural history. They purchased fireplace mantels, cornices, and door frames. On November 11, 1924, the American Wing of the Metropolitan Museum of Art opened a permanent display that recreated Gadsby’s Ballroom (now renamed the “Alexandria Ballroom”) to the public.

When it was clear that Gadsby’s was going to be torn down, the city’s officials worked together with concerned citizens to save the buildings. They hired Thomas Tileston Waterman, an architect who specialized in Colonial restoration, to bring the tavern and hotel back to its former glory.

In 1975, they reopened the place as “as a museum decided to the preserving and interpreting of the social and cultural heritage of Alexandria by teaching the public about the site and its significant contributions.”

People at Gadsby’s Tavern today are greeted with an interior that immediately transports them to the Tavern’s heyday two hundred years ago. The dining tables and chairs of dark wood share the colonial atmosphere with servers in colonial clothing and food reminiscent of that time.

It’s worth the trip for the atmosphere anyway, but keep your eyes open as you dine. You may see a woman in a white dress pass out of the corner of your eye.