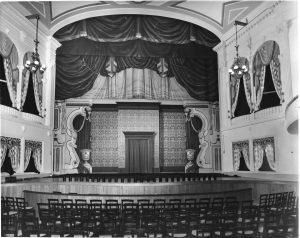 Ford’s Theatre in Washington, D.C. on 10th Street NW, is one of the oldest stage theatres in the country. And today, as well as being a museum it still hosts popular plays for those who appreciate the dramatic arts. However, the theatre has a dark cloud that still looms over the stage. It was the site of one of the nation’s most tragic moments.

At the time of its heyday, it was an entertaining respite from the war that raged in the United States, the North pitted against the South. Many presidents visited the theatre, but one President seems to be sticking around long after his untimely death. 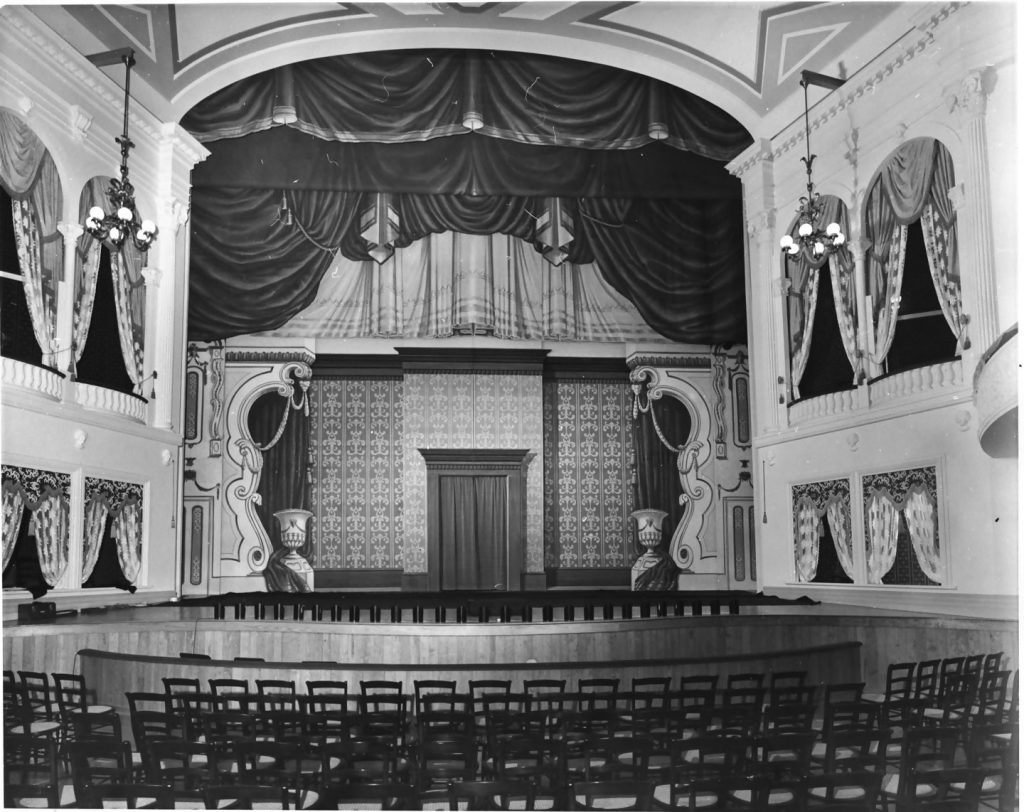 At the outset, the building that housed the theatre was originally a church. It was constructed in 1833 and served as the meeting house of the First Baptist Church in Washington with Obadiah Bruen Brown as the pastor. It would remain as the site of the church until 1861 when the congregation relocated to a much larger building. That same year, John T. Ford a wild-eyed theatre producer decided to purchase the building and renovate it as a stage theatre. The project was delayed due to a fire that broke out the following year. After rebuilding, Ford’s Theatre officially opened to the public in 1863.

The Assassination Of Abraham Lincoln 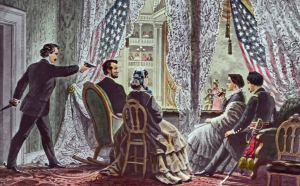 President Abraham Lincoln along with his wife Mary and two others were watching a play titled “Our American Cousin”. Lincoln and his party were sitting in the presidential box on the night of April 14, 1865. Five days prior, the Confederate forces had surrendered to the Union Army thus ending the US Civil War. However, John Wilkes Booth, a noted actor of the time and convinced Confederate sympathizer wanted to see to it that Lincoln would pay dearly for the Confederacy’s defeat.

He and a band of conspirators crafted an elaborate plot to revitalize the Confederate cause by kidnapping and killing the three most important members of the United States Government. It was, apart from Lincoln’s death an abject failure, it was however the first successful assassination of an American president.

Booth’s role had him sneak into the President’s box and kidnap Lincoln. He lost his nerve or was interrupted in his plan. Instead, he shot Lincoln in the head. To escape he jumped from the box and hit the stage below, spraining his ankle while shouting “Sic Semper Tyranus”, a shortened version of the Latin phrase “Sic semper evello mortem tyrannis” – Thus always I bring death to tyrants.

He escaped the theatre and was pursued in a 12-day manhunt, eventually being tracked down, after visiting a Maryland tavern owned by co-conspirator Mary Surrat and collecting weapons, in Virginia during a shootout at Garrets Farm on April 26, 1865.

Meanwhile, at Ford’s Theatre, the fatally wounded President was carried across the street to the home of tailor William Peterson, where Lincoln was laid diagonally across the first-floor bedroom, owing to his height.

The following day, Lincoln succumbed to his injuries as a result of Booth’s attack. As the nation mourned, Booth was on the run for his life. As he was hiding in the Maryland woods, some of the co-conspirators of the assassination were also arrested or shot. One such conspirator was Mary Surratt, who owned not only the tavern where Booth sheltered but a boarding home in Washington that housed Booth at one point in time. The boarding house where Mary Surrat lived still reverberates to her muttered claims of being innocent, while all signs point to her guilt.

Booth eventually crossed into Virginia via the Potomac River. However, he was later tracked down by U.S. soldiers while taking refuge in the Garret Farm near Port Royal, Virginia. One of the soldiers open fired and struck Booth. Booth died later from his injuries. The eight co-conspirators of the assassination would soon suffer a similar fate. They were all either shot or tried and later executed by hanging. 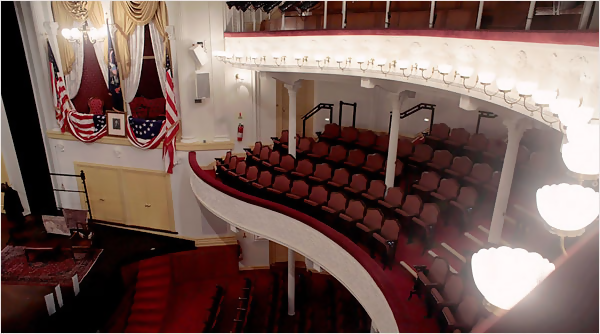 The theatre was still standing after the assassination of President Lincoln, but no more showings were held. The government had appropriated funds to John T. Ford as part of the compensation for what had happened at the theatre. Soon however the United States Army took over the building, in 1866, it was used for the purpose of storing records for the United States Department of War. The building also housed the Surgeon General’s library and the Army Medical Museum. About twenty years later, the records were relocated and the theatre was later converted into an office for the War Department clerks.

The theatre would soon experience another tragedy in 1893 when the front end of the building collapsed, resulting in the deaths of 22 War Department clerks and nearly 70 injuries. While there was no known cause, the curse of the building was blamed by many. The tragic deaths of so many did not help this location recover its reputation. This may have been one of many stories told by history enthusiasts with a penchant for the supernatural over the years. Eventually, the building was later restored and used as a warehouse up until the early 20th century.

It was left abandoned for nearly a decade. In 1928, the War Department handed over the building to the Office of Public Buildings and Parks of the National Capital. The new tenants didn’t waste any time with their plans to turn the first floor of the theatre into a museum dedicated to Abraham Lincoln, it was opened on February 12, 1932 (which was Lincoln’s 123rd birthday).

The following year, the National Park Service took over sole control of the building. The renovation and restoration of the building to a working theatre and museum were planned in the 1940s, but the project itself would take about two decades. In 1964, the restoration project was approved and granted the funds. The project was finally completed in 1968. On January 30th of that year, a gala performance was held. It was the first show of its kind since the Lincoln assassination more than a century earlier.

Nearly 40 years later, the theatre underwent another round of renovations and was re-opened in 2009. Later that year, a celebration in honor of Lincoln’s 200th birthday was held featuring a long list of celebrities and featured remarks by then-President Barack Obama.

According to one historian, it was said that Lincoln was having premonitions of an assassination attempt. He confided to a friend that he had a dream that he was walking inside the White House and noticed that he was surrounded by a mournful scene. In the dream, he encountered a mourner and asked who had died to which the mourner replied “the President”. However, this may not have been the only bit of paranormal activity that might have been related to the assassination. Lincoln’s ghost may still lurk around at the theatre itself, angry at the unfinished business Lincoln left behind. It has been said that past occupants of the building reported feeling cold spots and even seeing a shadowy figure in a stovepipe hat walking around.

Lincoln’s ghost is one of the most mobile specters in history, having been sighted in several places key to the president’s life. Including the White House, which has its own ghostly sightings, recounted by various occupants of the White House, with Eleanor Roosevelt being one of the first to report feeling “presences”. She also recalled seeing Fala, the family dog, barking for no apparent reason at a moving spot on the wall. Lincoln’s presence inside the White House was reportedly last seen by Maureen Reagan, the daughter of then-President Ronald Reagan at some point during the early 1980s.

One such sighting of Lincoln’s ghost was by British Prime Minister Winston Churchill, who was staying in the Lincoln Bedroom during the presidency of Franklin Roosevelt. After completing a bath, Churchill left the tub, as was his habit, without any clothes on, to retrieve his cigar. While in the bedroom, he spotted what was apparently the spirit of Lincoln. With his patent wit, Churchill replied, “Good evening, Mr. President. you seem to have caught me at a disadvantage.” Lincoln was said to have smiled in response before disappearing.

To honor a President

Ford’s Theatre to this day remains one of the most popular tourist attractions in the Nation’s Capital. While it is infamous for one of America’s most tragic events, the theatre still honors America’s 16th president. Does Lincoln still pay an occasional visit to the Presidential Box that has long since been vacant? It might be worth visiting the theatre to find out.