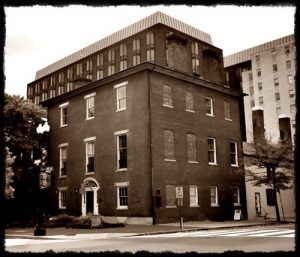 Easily deserving of its place on a list of important haunted spaces in Washington, D.C. is the Decatur House. Home to ghosts, grudges, misery, and death by dueling. As well as a sordid and bloody end for the original owner, this house has had an important and vibrant history since accompanied by several restless ghosts. It is now a national historic monument and available for your event if you can stand the infestation of ghouls.

A home for a naval hero

The Decatur House dates from 1818 and is an original in Washington, D.C. One of the three houses across the whole country that had that were designed by architect Benjamin Henry Latrobe, who designed in the neoclassical style, the scruffy and bespectacled Englishman was responsible for a lot of the surveying, and since destroyed, the architecture of the capital.

The house was built for national military hero Commodore Stephen Decatur and Susan, his wife. As well as bringing naval victories home during the Barbary wars where Sweden and the United States fought the Ottoman empire – then known as the Barbary states. Decatur was portrayed by the newspapers of the day as a dashing hero, a potential candidate for President, he was also a fixture on the D.C. social circuit with his young and beautiful wife.

His spectacular capture of the British frigate HMS Macedonia during the war of 1812 earned Decatur renown at home and a significant prize from the navy. Decatur was also appointed to the Board of Naval Commissioners and required to move to Washington D.C.

He used his prize money to build this Federal Style home conveniently located across the street from Lafayette Square and from the White House. Later it also served as a de facto home to Secretaries of State Martin Van Buren, Henry Clay, and E. Livingston. This made the Decatur House a semi-official residence for the incumbent Secretary of state for the years 1827 thru 1833, because each one of them rented the house while they served in that official government post.

John Gadsby, his wife Providence, and their slaves took up residence in the house in 1836. They built a slave quarters building over a could of stories at the rear of the main house. Notable for being one of the only remaining examples of such buildings in modern cities.

Following Gadsby’s death, Decatur House was leased to some of the most notable people of the time. Residents include; Publisher and former Mayor of Washington Joseph Gales, VP George M Dallas, Congressmen John and James King (who were brothers), Representative William Appleton, James Lawrence Orr, Speaker of the House and Senator Judah Benjamin. The Decatur House continued to serve as it was used as offices for the Army during the Civil War. 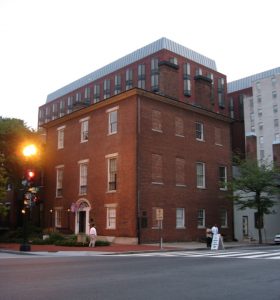 The Decatur House is a museum these days. Located at number 748 Jackson Place, NW, on Lafayette Park. The ground floor of the elegant house is kept just as it was in the early 19th century while the upstairs floor demonstrates how it has been updated and modernized through the 20th century.

As a museum, the Decatur House contains exhibits and interpretations of the African American experience in the USA. This is because of the importance of its residents, and the strong connection with the dozens of domestic slaves who worked there, right across the road from the White House.  Among the many stories is that of Charlotte Dupuy. In 1829 she sued her master, Henry Clay then-Secretary of State, for her freedom and the freedom of her two children. She would lose her court case, however. After a tense and unpleasant period of non-violent protest at home Clay finally freed Dupuy and her daughter in 1840, but not her son, who had to wait until 1844 to be reunited with his mother.  The anxious ghost of Charlotte Dupuy is said to still haunt the pavement outside the Decatur house awaiting the release of her son.

Commodore Stephen Decatur, the naval hero, leader of men, and the national icon still paces the Decatur house. In the early nineteenth century killing a man was as easy as disagreeing with him. The brutal tradition of Dueling was still popular among some circles.

Being popular, and in the highly lucrative and competitive US Navy, Commodore Decatur was a man with enemies. One man who had a keen interest in the early demise of Decatur was Commodore James Barron, Barron was already under court-martial. This was due to the fact that he had been ill-prepared in battle and was forced to surrender his ship, the USS Chesapeake to the British before the start of the War of 1812.

Barron was then suspended from the Navy for five years without pay and stranded in Sweden without the means to support himself.  Decatur and Barron had an open exchange of elaborate insults and Decatur enjoyed bad-mouthing Barron to anyone who would listen, unaware he was stranded. This caused a lot of bad blood between Decatur and Barron.

Barron eventually had enough of Decatur and, once he returned to America and was permitted to rejoin the navy, he challenged Decatur to a duel. The duel took place on March 22, 1820, at the Bladensburg Dueling grounds just outside the city limits, as dueling was illegal in Washington D.C. Both men chose to use pistols and Decatur was mortally wounded in the fight. He died at home the following day.

The suspect motives of the two dueling seconds

Each participant nominated a second to negotiate the terms of the duel and take their place if they became incapacitated.  Both men were forced by happenstance to choose individuals who would enjoy seeing Decatur die. The cards were stacked against Commodore Stephen Decatur. He was forced to choose someone he was in an argument with until just before the duel. The idea of dueling was losing ground and many of the first choices Decatur approached as substitute refused on moral grounds.

Barron’s choice for a second also had a longstanding resentment for Decatur. The seconds were tasked with negotiating the terms for the duel. The terms they agreed seemed to favor Barron heavily.

The two men were instructed to stand eight, not ten paces apart. To help the ailing eyesight of Barron. The scheming seconds also decided the men should aim pistols prior to walking away for each other. It was almost a foregone conclusion that someone’s blood would be spilled at 9:00 am on the cold and misty morning of March 22, 1820.

The duel was a success if you were not Commodore Stephen Decatur. He was mortally wounded, and bled heavily, the bullet smashing his hips and severing several arteries. His friends transported him to his house on Lafayette square and made him comfortable, keeping away his nieces so they did not see him in the miserable state.

After the death rumors spread of a possible scheme between the seconds to doom Decatur to participate in a rigged duel. No convictions were brought but the terms seemed to all unfair and Decatur died an unjust death.

Decatur’s funeral on March 24 was the largest public gathering in the nation’s nascent capital up to that point. An official day of mourning was declared, and the funeral procession swayed slowly past the White House, down Pennsylvania Avenue towards the as yet unfinished Capitol Building. Every bell in the city rung, and according to some reports, 10,000 mourners gathered, nearly one third the population of the city.

His widow, Susan mourned for an extended period of time and was forced to sell many of her late husband’s possessions, rent out the house, and move to a modest residence in Georgetown. She still entertained the cream of Washington society though.

People eventually started to notice the face of Decatur appearing in the second-story window of the home with a pained expression on his face. The sightings became so frequent and unsettling for passersby that the windows were bricked up. Others swear they have seen him walking down the stairs of the house and out the back door, with a pistol in his hand.

Who else roams the Decatur House?

With such a long and colorful history, Decatur cannot possibly be the only poor soul that haunts the Decatur House. He isn’t. Charlotte Dupuy was a slave of Henry Clay, along with her two children. In 1829, Charlotte sued then the current Secretary of State, Henry Clay trying to gain freedom for herself and her daughter. Sadly, she lost the case, and she and her family remained enslaved for another decade before finally gaining freedom.

residents and visitors alike have reportedly heard Charlotte Dupuy crying and walking the halls, begging for freedom for herself and her children. As one of the oldest homes in Washington, D.C. it is quite possible that there are more spirits that haunt the Decatur House. This home saw a multitude of politicians and their families. There were most likely countless births, and probably deaths, that happened in the Decatur House.

In addition, that area of Washington, D.C. is known for being plagued by scandals and intrigue. Countless duels and fights have taken place in the area over the years. If you walk the streets, you can feel the presence of these other poor souls.

These days the Decatur House is a museum. Museum employees have reported several unexplained noises, fleeting sightings and noises that cannot be explained.

Washington is at its most atmospheric in October. You can take full advantage of all of the museum tours and haunted walking night tours that are offered. During the day you can easily get around town and see other historical places and enjoy all of the individual areas that make up Washington, D.C. 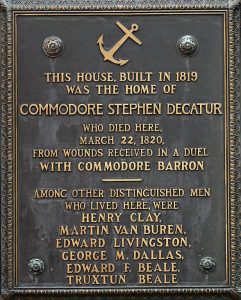 The dense history of Lafayette Square

Many walking tours of the haunted areas of DC and the White House start out in Lafayette Square, which is also called Tragedy Square. These walking tours are a great way to learn about the violent deaths of many famous and important people over the years that have left their spirits in their wake. These tours are also a great chance to learn about the many affairs, duels, and scandals that have taken place in this historic city over the years.

Visiting Washington DC is a must-do activity. There are dozens of museums and landmarks to visit. These places are fascinating because they tell the story of American history through personal stories of pain and suffering. However, as well as it’s less seemly side it is also home to the arts and entertainment, great shops and restaurants, and many well-regarded colleges with beautiful campuses.

If you are really in the mood for being scared, you can also check out this haunted walking tour throughout the city. Washington, DC is home to many different neighborhoods, which have been around for ages, and they all have their own ghost stories and hauntings.