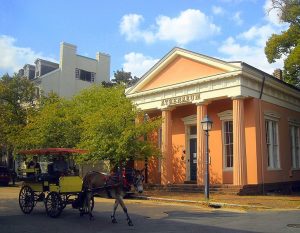 Alexandria, Virginia, has an exciting place in history, and especially when it comes to the ghosts that haunt every corner of this city, it seems. A place in the literal middle of so many conflicts, wars, politics, and human suffering and drama would make the perfect place for ghosts to hide in every corner.

One of the city’s surveyors was George Washington himself, who would use the grid system to plan for Washington D.C. one day. The town was also an enormously important port for tobacco, grains, cotton, and, unfortunately, slaves.

Slaves were such an essential part of the local economy that they affected Washington DC’s geography. Initially, Old Town Alexandria was ceded from Virginia to create D.C. Still, once talk started in earnest in the capital about abolishing slavery, Old Town was able to make their case to leave D.C. and return to the Virginia side of Alexandria and continue their slave-trading until the Civil War.

Wellington Watts is well known around the area as he owns one of the ghost tours there. He mentions how he gets told many stories by homeowners and tenants, but they usually don’t want to be mentioned on tour. So, he has a few different stories to tell.

One person explained that they lived in a house from the 1700s, and there was an antique spinning wheel in the attic. The family who built the house had a difficult man as their patriarch, and he refused to let his daughter date or marry. The woman channeled her anger into her spinning wheel, and to this day, it will spin from time to time on its own. The new owners have even moved the sizeable wooden wheel to other parts of the house, only for it to mysteriously show back up in the attic overnight, unheard by the sleeping family members.

The same house also had an incident where the sheets were violently ripped off by the sleeping family members. They quickly left the house after that.

The Tragedy of Laura Schafer

An ice cream shop is haunted by a woman who tragically died on her wedding day. Laura Schafer was going to marry her 26-year-old soldier beau in 1868. The night before her wedding, Laura tried on her wedding dress before walking across the hall to help put her grandmother to bed. When she closed the bedroom door, the long train of dress got caught.

A kerosene lamp she was carrying split onto her dress, splashing fire on her dress. She ran to the door to escape, but the humidity of the air had swollen the door shut. When she managed to pull it open, the air fanned the flames, causing her entire body to become engulfed in fire.

Though her brother ran to help her, it was too late. She died on her wedding day. Her funeral was held at 11 a.m. on her wedding day, and people swear they were a woman weeping when the clocks strike 11. Lanterns and other items have moved around the property, and people have seen a figure in a white dress with a long train.

In the early 1800s, a doctor went missing, presumed dead. Occupants of his home came and went over the years until the new tenets arrived in the 1970s. This new family found themselves having terrifying nightmares every night since they had moved into the house. They were at their wit’s end due to lack of sleep and the fear from these creepy dreams.

Frustrated and wanting answers, one family member decided to look around the house to see if anything was causing the night terrors. He heads into the house’s basement and discovers a hidden well. Once he dried the lid off the well, the stench of death made him almost sick. In the bottom of the well was a corpse in a crumpled heap. He was dressed from the 1800s and had a knife sticking out of one of his empty eye sockets.

The Horror on St. Asaph Street

In the early 1900s, a man named Clem fell madly in love with a woman named Rose. She didn’t feel the same affection towards him–in fact, she was interested in the local butcher and hoped to start a relationship with him.

Clem’s anger about his rejection and jealousy overseeing her flirting with the local butcher made him snap one day. Determined that no other man would have her if he couldn’t, he attacked her in her home and cut her throat. Confident that he would now be able to share the afterlife with her, he then slit his own throat.

Ironically, he hadn’t cut deep enough, and Rose survived the encounter with some blood loss.

If you find yourself walking down St. Asaph Street and hear footsteps approaching from behind, you need to turn around quickly. It’s most likely Clem with his bloody razor, coming to find Rose and finish the job. Or, if he can’t find her, he may take you instead.

During the War of 1812, it was British vs. American all over again. Alexandria was about to be raided by the British. Before leaving the city, Americans captured two British undercover spies and hung them in a house’s living room to message other possible spies. A young boy confessed to having seen the spies still hanging from the rafters in his living room in modern times.

The Devil-Bat Who Saved City Hall?

Louie Robert owned a framing shop on Cameron Street, and Residents had told him stories of a creature he referred to as the “Devil-Bat.” Robert claimed this creature had watched over the city since its colonial days. It even protected the town when needed. It had a habit of chasing out troublemakers.

When the city built a clock tower in 1817, the Devil-Bat moved in. After a fire forced the building to be rebuilt in 1871, the Devil-Bat quickly returned home. Its famous claim to fame was when a group of sailors rioted in the city. The Devil-Bat swooped out of the darkness and terrified the sailors into running for their very lives. Robert said the Devil-Bat probably saved the City Hall from being destroyed.

Weighing Down the Dead

The most famous tombstone in the city is that of The Female Stranger outside of Gadsby’s Tavern. Its tabletop design is not just a fluke for this one grave–it turns out this is a common adaptation to living near a river that likes to jump its banks.

The Potomac River has risen so often that wealthy Alexandrians created graves with heavy stone tops to keep the river from sweeping the dead away. The heavy stones also act as places where families can gather and sit or picnic with their ancestors. Those without the heavy stone tombstones might be unfortunate enough to see a family member float by the next time the river flooded.

Losing Your Head at the Wilkes Street Tunnel

Some places become a beacon for bad things to happen, which surely applies to the Wilkes Street tunnel.

First, a man was murdered, his body was laid upon the train tracks on the tunnel’s western side. The killer(s) laid the body so the head was resting on the rails and crushed under a passing train. The victim was never identified.

Afterward, at the end of the Civil War in 1865, a young soldier was discovered to have been stabbed in the tunnel in the evening time’s bright sunshine. The murder(s) were never caught; it was believed the man had been lured to the tunnel, robbed, and killed.

Finally, a drunken soldier in the eastern portion of the tunnel managed to have his leg mangled by another passing train in 1862.

Check out more haunted locations, watch a ghost tour from home, or book a ghost tour of Washington D.C. in person at https://dcghosts.com.