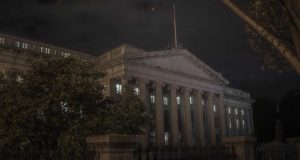 Washington D.C. is the focus for the rising and ebbing passions about how the United States is run. When passions run high and there is a lot at stake, people act in mysterious ways. Those two things happen so often in Washington D.C. the energy in the air is often palpable

Washington D.C. became the nation’s capital in 1791, replacing New York City. It was built practically from the ground up, allowing for the impressive open expanses of the national mall, Presidents Park and the Museum mile.

Although it is home to many of the most popular tourist attractions in the county (and maybe the world), one of the most popular tourist attractions there is something that is not often seen.  And when it is seen, it is not often welcome. Ghosts, hauntings, apparitions and ghouls are common in Washington D.C. the leftover spirits of lives left unlived that ended in turmoil.

So many places in this town, hot and swampy in the Summer, cold and frigid in the Winter have supernatural stories to tell that we can easily highlight only ten and still tell tales to make you wonder if they can’t all be imagined. 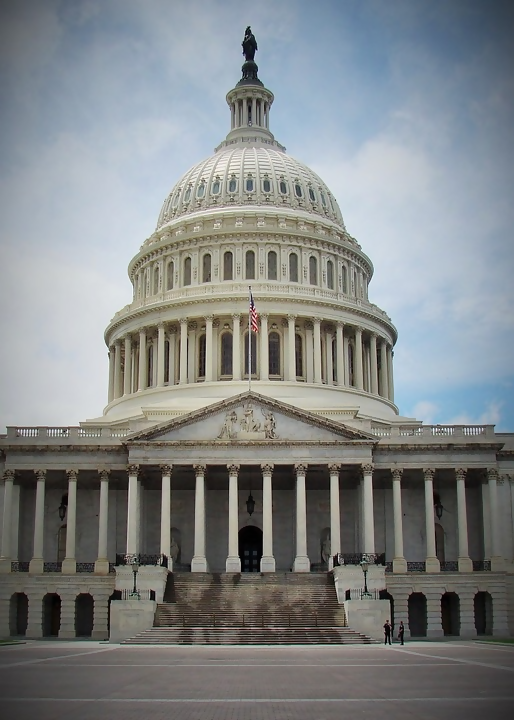 First on the list is one of the most iconic buildings of our nation’s capital. The Capitol building houses ghosts and the chambers of Congress (and at one point in time, the United States Supreme Court). Many members of Congress have died in the building over the years. One of the most notable was John Quincy Adams — the sixth President of the United States. Adams suffered a stroke and later died in the Speaker’s rooms. It is believed that the ghost of Adams can be sometimes be heard yelling ‘NO!” in the speaker’s chamber.

A ghostly black cat is believed to stalk the capitol’s halls only before some of the darkest times in American history. This cat was said to appear in a foretelling of Adams’ death. Some accounts go well into the 20th century. Sightings of a black cat were said to be reported before the Stock Market crash of 1929 and the assassination of John F. Kennedy.

It is uncertain if such sightings ever occurred recently, but some might take heed of dark times ahead if a black cat appears on the Capitol grounds. 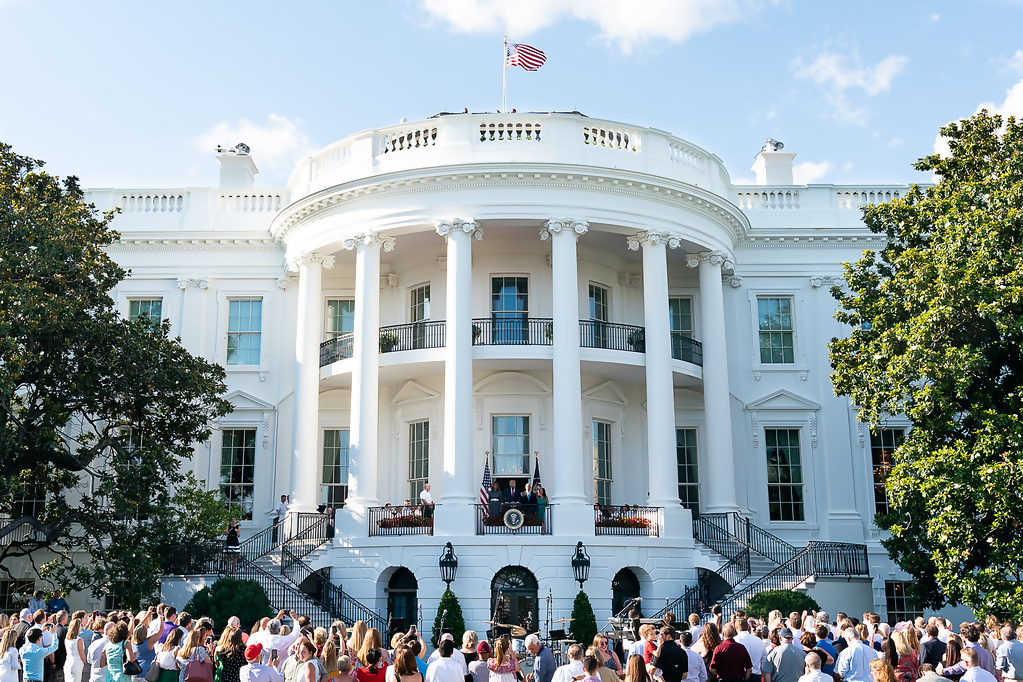 The White House was home to 44 of the 45 US Presidents. Only George Washington did not occupy the White House. But who would have thought that 1600 Pennsylvania Avenue was such a haunted house?

Many ghosts continue to be attracted to the seat of power for the person with the most important job in the world. Dolley Madison, of maybe a fixture in the hallowed halls even after her death nearly 200 years ago.

Other ghosts that have been seen include Abraham Lincoln’s tall imposing silhouette seen long after he shuffled off this mortal coil. Bess Truman, who was the First Lady during the presidency of her husband Harry Truman, often heard rattling outside of the Lincoln Bedroom. But Mrs. Truman was not alone. The first lady before her, Eleanor Roosevelt, said she would often feel a presence outside of the Lincoln Bedroom. Even Roosevelt’s dog Fala would bark for no apparent reason at times. More reports come from the huge list of dignitaries who have either visited or spent the night at the White House. A recent report was from Maureen Reagan, the daughter of President Ronald Reagan, who believed she had seen a ghostly figure standing in the White House hallway, once again outside the Lincoln bedroom of the White House.

or spent the night at the White House. The last known “presence” reported was when Maureen Reagan, the daughter of President Ronald Reagan, believed to have seen a figure standing in the hallway. 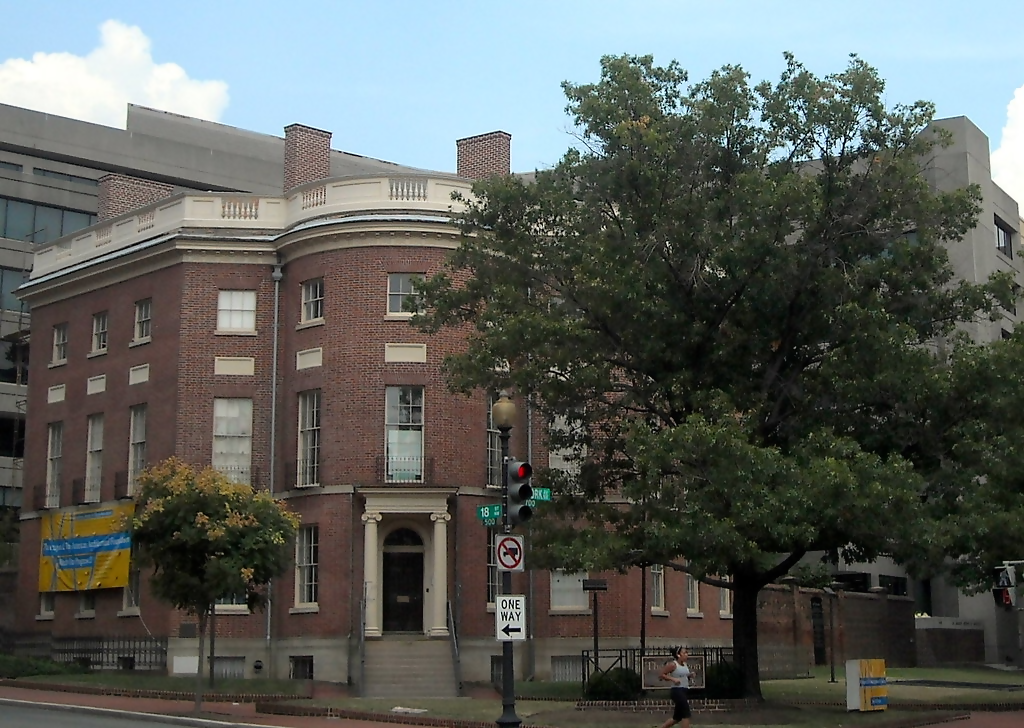 If the spirit of Dolley Madison is not making herself felt on the White House grounds, she will probably be here at the Octagon House. Her husband, then-President James Madison, and herself resided here shortly after the White House burned down during the War of 1812. Before that, this was the home of Colonel John Tayloe and his family who built the oddly shaped building, read why it was called the Octagon building, even though it only has six sides.

Aside from Dolley Madison being an unwelcome presence, others have bells ringing for no apparent reason and even some screams that belong to young girls. The screams could be from the spirits of the daughter of Colonel Tayloe. One of his girls is said to have died here at the Octagon House after falling over a stairway railing and plunging to her death on the elegant octagonal design of the wood floor below. 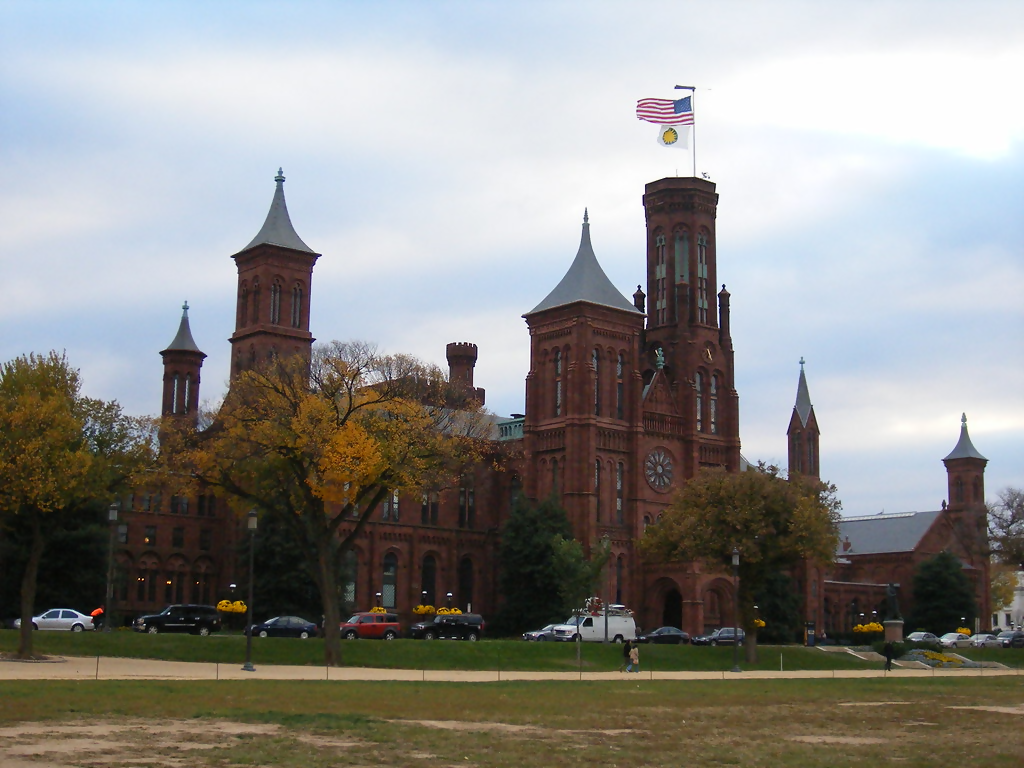 Of all the museums of Washington D.C., the Smithsonian is probably the most famous, it is certainly the largest with over 2.7 million square feet across its 17 locations and the National Zoo. But could it also be one of the most haunted museums? The stories of ghosts wandering the halls of the Smithsonian span many years. One of the most famous ghosts is that of James Smithson himself. An Englishman who never visited the United States, yet left his considerable fortune to the institution he never visited. This act of spite was to snub the family that never really considered him one of their own.

In 1973, a museum curator at the Smithsonian took it upon himself to open the coffin that contained the remains of Smithson. Some doubts had been raised as to the contents of the casket. His bones were indeed present, and he was reinterred in a small ceremony again at his inconspicuous gravesite.

Paleontologist Fielding B. Meek lived with his cat in small accommodations under the stairs in the Smithsonian. An unhappy man with mournful eyes, he was moved away from his unusual quarters. He became ill, died, and yet still roams the halls looking for more fascinating conversation about science. There is so much history on display at one of the many museums that make up the Smithsonian, people are drawn there, as well as ghosts.

The stately Ford’s Theatre is famous for one of the most tragic events in American history. The very first assassination of an American President. Abraham Lincoln was watching a play on the night of April 14, 1865, when an assassin named Wilkes Booth shot Abraham Lincoln, who died the following day. It has been reported that the ghost of Lincoln was first sighted as early as 1869 or 1870. However, some actors that have rehearsed on the stage to this day report a peaceful spiritual presence.

Lincoln’s ghost has been seen in various parts of D.C. Indeed, a woman who was present during the assassination was said to have been visited by Lincoln’s apparition outside of her home in upstate New York. 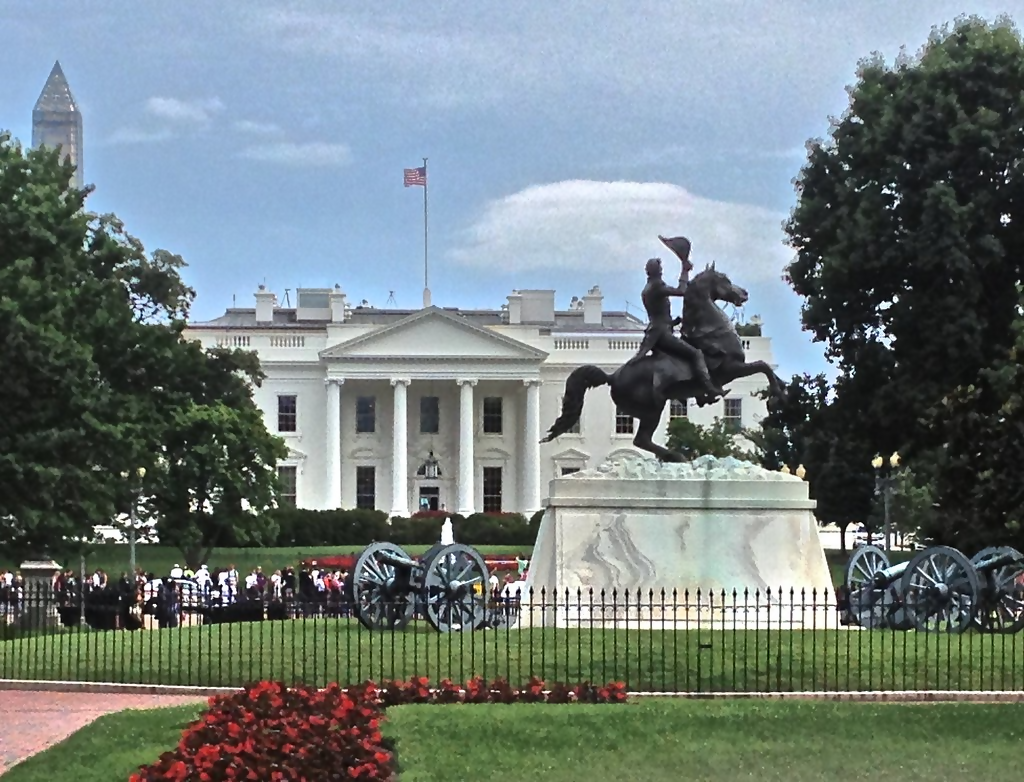 When you step just north of the grounds of the White House, you step right into another haunted landmark; Lafayette Square Park is just across the street from the White House. This tree-filled square with a bold saluting statue of Andrew Jackson in the center is surrounded by history, houses of the passionate people who brought this country to live.

The park is also the site of a gruesome killing. Philip Barton Key II was mortally wounded in an altercation by a Congressman friend after the latter accused Key of carrying on an affair with his wife. Key was shot and later taken to a home owned by Benjamin Ogle Tayloe. He there succumbed to his injuries.

The Congressman was named Daniel Sickles. Who was the first person to use the defense of temporary insanity successfully in court, he got away scot-free, but was haunted by the ghost of the man he killed in broad daylight in Lafayette Square Park. The man he shot, Philip Barton Key was the son of Francis Scott Key, the man famous for providing the lyrics to the Star-Spangled Banner, our national anthem. 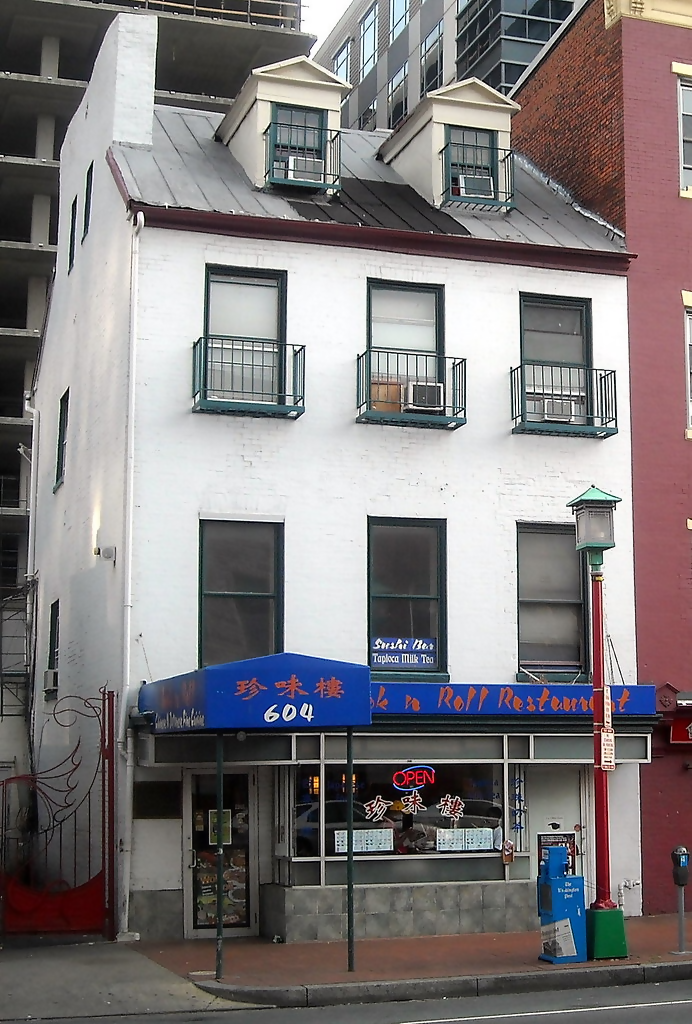 The Surratt House was a lowly boarding house, so why is it so famous? It turns out that it hosted many nefarious travelers who were plotting kidnapping, assassination, and the overthrow of the government. One of those who stayed at the Surratt house was John Wilkes Booth. The proprietor was Mary Surratt, a Confederate activist with her own chequered past. Booth was a frequent visitor of the house and had gotten to know Surratt and her son over a lengthy period. In the aftermath of the Lincoln Assassination, Surratt was tried and convicted with conspiracy in her role with the death of Lincoln. She was executed by hanging on July 7, 1865.

Long after her death, she appears to be haunting the house and other locations around the city, demanding we hear calls of her innocence. Today, a Chinese restaurant named Wok N’ Roll occupies the Surratt House, where one of America’s greatest conspiracies was hatched. 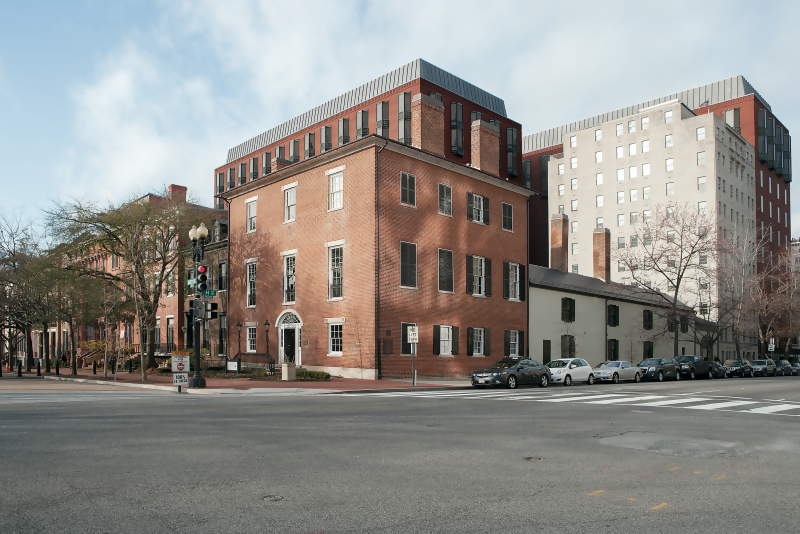 The Decatur House was named after the Navy Admiral Stephen Decatur. This is one of the many stops around Lafayette Square, so dense in history, ghosts and stories is this square. Just around the corner from the Octagon house, and across the square from the Cutts-Madison House the Decatur House has some secrets of its own.

It was here in this elegant neoclassical style house that Naval hero, explorer, and captain of several US warships Commodore John Decatur met his demise.  He was challenged to a duel by a man he had been responsible for banishing to the Nordic countries for over 5 years, he had stripped him of his rank, and his pay and continued to speak ill of him while he was in exile. One of the most unique features of the house is the boarded-up windows. It was said that the ghost of the Decatur House was seen looking out one of these windows so often that they were bricked up. 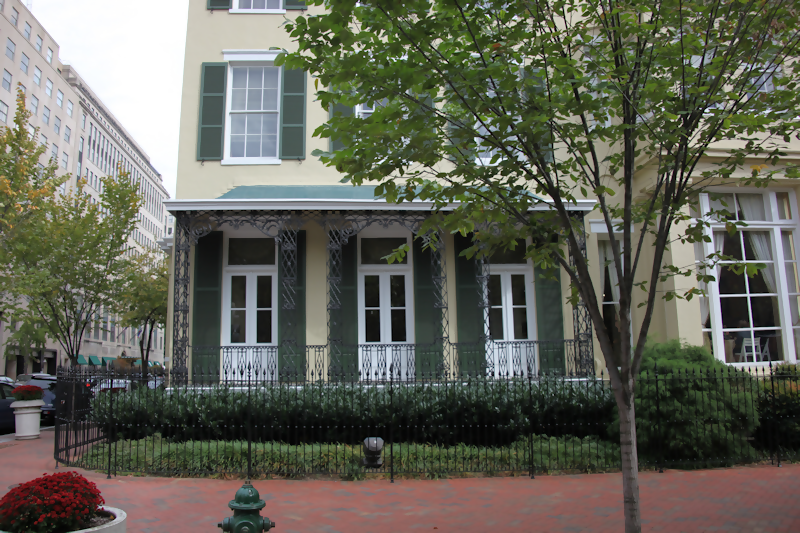 Dolley Madison was one of the most beloved first ladies of the united states, her name became a byword for elegant hospitality. This colonial-style house was her home from 1837 to her death in 1849. And it is considered to be one of the many places that her ghost might be roaming. Welcoming to visitors beyond the end of her time on earth, her ghost was often seen sitting on the elegant porch of the Cutts-Madison House waving to passersby.

The mortgage of the home was given to then former President James Madison in 1828. The 4th President of the United States would later die at his Virginia residence known as Montpelier in 1836. The later building became the Cosmos club, which started as a gentleman’s club, whose slightly inebriated members could be seen doffing their hats to an unseen woman on the porch of the building.

There is only one of these ten haunted Washington landmarks that you can sleep at without knowing someone very important. The Hay-Adams Hotel was converted into its current luxury accommodations by Joseph Manger, a national hotel magnate, who also drew his last breath at the hotel.

It was originally two houses, of John Hay and Henry Adams, both were active statesmen in Washington, D.C. Henry Adam’s wife Marian Hooper Adams, or “Clover”, committed suicide on December 6, 1885, at the house. Marian was a photographer in her own right. She used a chemical known as potassium cyanide for developing her photographic work. However, it would also be responsible for her death as she swallowed a lethal amount following a bout of depression following the death of her father, and several rumored infidelities by her husband.

Her ghost is quite active in the Hay-Adams hotel, walking down corridors, leaving the lingering almond scent of potassium cyanide distinctive, especially around the month of December, the anniversary of her death. Don’t let the presence of Clover detract from the appeal of this hotel, it’s still the place to be seen, and to see for the elites of Washington D.C.

Click To Join Our Haunted Monthly Newsletter! Stay updated on stories of hauntings and intrigue!